Writing by hand and reading 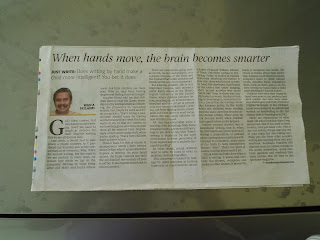 I just returned from France after a month in and around Nice.

Some of the salient points in the article are:
"As your hand moves, the brain controls not only the mechanical movements of your hand but it also reports them back to central control"

"There are movements going back and forth, mental and physical, in a complex interplay of the body and the intellect that builds muscles and builds up the store in your memory".

"... when children perceive letters,a reading circuit in the brain is recruited and the circuit is present only after hand writing, not from tapping letters on the key-board..."

"In other words, young children need to write by hand in order to facilitate their reading skills".

"Think what the brain does when a child is writing: It learns and controls the shapes, compares one stroke to other strokes, it moves the hand, it recognises the words,discovers or thinks about their meaning, it learns to put them in context, compares them to other, similar words, classifies them, remembers them, and so on".

Luqman: In 1912 Maria Montessori wrote, in effect, that "It's easy to teach kids to read if they are first expert at handwriting the letters, but often difficult if they are not".

And now science is validating her idea, and it's too bad that educators can't see that.

Dear Bob,
I write in forums and have found that it is not an easy task to get most people to even think about what one has to say.The educators nor the researchers are willing to keep an open mind on anything new or different from what they have learnt.

A professor in London once emailed me that it's not in the "Zeitgeist" of our times to think of anything except "phonics", and that there is any single answer to our education/literacy problem.

The resistance among educators in the USA to the notion that they might not know everything is overwhelming. It will probable have to wait for the current crop to retire or to die out before the real truth comes into play. Of course, we think we already know what that is.

Dear Bob,
You said"It will probably have to wait for the current crop to retire or to die out before the real truth comes into play".

I thought so too Bob especially after writing to many of the existing professors in UK, US and NZ. But, I believe that researchers are now willing to accept that 'dyslexics' do not have a phonological awareness deficit as touted by many of the researchers over the last 35 odd years.

I also see quite a few articles on 'hand writing' in the recent months.So, sit tight and watch!

You are very right. In the USA there have been a number of TV shows and newspaper articles saying that, and though the Obama administration is not on board, a contender in our next election is Scott Walker, governor of Wisconsin state. He's in favor of education reform and against teachers unions, so we'll wait and see how this turns out. (Hopefully while we're still alive)

Yes Bob, No one can stop us from hoping...Let us do what we can and leave the rest to nature...

Yes, we can only do so much personally, but with this amazing new Internet, our efforts are magnified, so maybe the future and "nature" will be favorable.

Let us not lose heart. Let us continue doing 'what we have to do so that we can do what we want to'.

All we have to decide is what to do with the time that is given us.

You are right that we shouldn't lose heart. But I'm really impressed by the resistance put up by educators in America. They are afraid of being exposed as not knowing their own jobs.

All these features make Intellexer Summarizer an easy-to-use customizable desktop application that will definitely be useful for those of you who want to reduce the time and efforts spent on searching and analyzing information on the Internet. See more summarize an article for me

If kids learn to handwrite fluently they read and know phonics and phonemic awareness without specific instruction, as Luqman and I both know.