Congratulations to one my former student 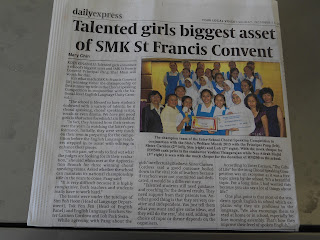 I wrote about one of my first students who drove me up the wall with refusing to sound out the word fox. She had been taught letter sound correspondences wrongly by her Tuition Centre. Please read details in my post here:

A month ago, the above student from SMK St Francis Convent, Yoshini Thiagarajan came to my house for a visit and I learned from her that she was selected for the National 2012 Selangor Chorul Speaking. That is a feat for anyone let alone someone who could not read even after 2 and a half years of kindergarten and half a year in primary one.

Besides Choral speaking she is also active in Dancing and Bakat Interac.
She was in the top 5 in Form 3 (Grade 9) in 2014 and is maintaining her position in her school. Her best subjects are Mathematics and English!

Today I was pleasantly surprised to see her photo in the Daily Express.  She was the conductor of the Inter-School Choral Speaking Competition. Her team emerged as the champion team. Her team will again represent Sabah in the National competition.

As I have mentioned many time before; No amount of money can give me the satisfaction that this kind of news gives me.
Congratulations Yoshini Thiagarajan.
Posted by Luqman Michel at 3:20 PM

I have known Mr. Luqman for many years.
Whatever he does, he strives to do his best.
I hope dyslexics all over the world would benefit from his arduous efforts.
I wish him the very best.
Professor Datuk Dr P Muthusamy JP
MBBS ( Madras), DO (Lond), FRCOphth, FRCSEd, A.M (Malaysia)
Consultant Ophthalmologist, KK Specialist Centre
Founder: Muthusamy Virtual University of Postgraduate Ophthalmology
Adjunct Professor, Medical School, University Malaysia Sabah

Thank you Dr.Muthu for your kind words.
May God continue His Blessings upon you and your family.

There was very wonderful information and that's great one. I really appreciate the kind words, thanks for sharing that valuable information.
Film editing course in chennai

Thank you for your comment katrinahelen.
Wish you well.