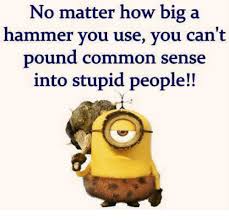 “Life is really simple, but we insist on making it complicated”. Confucius

The above is the internet definition of common sense. But is 'Common sense' common?


Anyone with a little common sense would have accepted what I had said back in 2010 and thus saved headaches of millions of parents as well as children throughout the world.

This is so clear to me and obvious to the teacher in UK. It is common sense. About 20% of kids predisposed to shutting down do indeed disengage from learning to read when they are taught wrong letter sounds.

Why hasn’t any research been done on this yet?

Why can’t there be a rigorous study of this issue to confirm or otherwise what I have discovered by observing and ‘interviewing’ (otherwise known as ‘direct experience’).


Thinking is the hardest work there is, which is probably the reason why so few engage in it. Henry Ford


The function of education is to teach one to think intensively and to think critically. Intelligence plus character - that is the goal of true education.