Suicide prevention and shut down kids 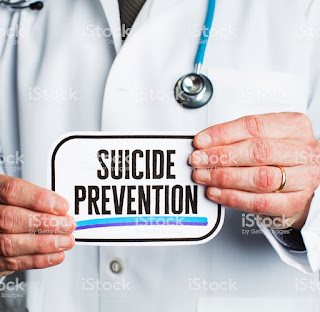 Recently I read a post on LinkedIn published on 12.9.2018 entitled:

“Suicide Prevention Plan: 5 Tips to Deal With Thoughts of Suicide”

The article is written by psychiatrist Melissa Welby, MD.


Here are some extracts from the article above.

Suicide prevention
Suicide and suicidal thoughts are a response to incredible pain. The pain seems unending to the person experiencing it.
Some people experience recurrent thoughts of suicide. Coming up with a plan to manage these thoughts is essential and takes hard work in order to prevent suicide. The pain must be addressed and a safety net put in place.
Let's work together to increase understanding of suicidal ideation (thoughts of suicide), general empathy for each other, and reduce the stigma that can get in the way of people asking for help.
Suicide thoughts are tricky, it’s not like you really want to die, you just can’t go on living the life that you have and you don’t see a way out.

My comment: I believe a majority of kids who have suicidal tendencies are kids who have shut down. These are smart kids who simply cannot understand why they are unable to learn to read while their classmates can.

I know what the experts on LinkedIn will ask me like they did when I wrote about the so-called dyslexic kids – ‘What are your credentials? Where is your DATA? Where is your scientific evidence?’

They ask those questions because they cannot think logically. Anyway, what I am writing on is based on my observation of kids I have taught over the past 14 years on a one on one basis.

For a moment put yourself in the position of the shut down kids and see how you will feel if you had gone to school full of self-confidence with a healthy self-esteem which slowly gets eroded because you can’t read whilst others can.

Most of these kids are the ones who misbehave to avoid being called up to read and made a fool in front of the rest of the class.

My first student constantly needed assurance that he was not stupid. He continued asking me “Uncle Luqman, do you think I am stupid?” This went on until he was able to read. I had personally seen his self-esteem improving as his reading improved.

These shut down kids are the kids who feel helpless, hopeless and depressed.

Many of the kids whom I have tutored had observable changes in their self-esteem and self-confidence as the tuition progressed with me.

Another student I taught last year, Xaviera, used to baby talk every day she came for tuition. I believe this was her defense mechanism. The baby talks slowly reduced as she began to be able to read. I understand from her mother now that this baby talk has vanished.

I bet that once we teach the correct phonemes/ sounds represented by letters of the alphabet in school the kids classified as ‘Dyslexic’ will reduce greatly. This will result in reduced misbehavior in schools which in turn will reduce the number of people ultimately ending up as prison inmates or mental patients.

If we prevent kids from shutting down by teaching phonemes correctly we will not need so many prisons or mental institutions.

Here are a few corroborative evidence I have gathered from articles on the internet. I am sure I will be able to dig up more but the following should suffice, I guess.


Mixon realized Jack was dyslexic four years ago when — as a kindergartner in Las Vegas — his self-confidence plummeted as he struggled to read. She pulled him out to homeschool in first grade but has enrolled him this year as a fourth grader at Woodmere Elementary in Southeast Portland.

Some studies have listed the percentage of students with reading difficulties as high as 20 percent. That could mean thousands of children statewide could be newly eligible for extra help.
The inability to read well by third grade is correlated to a number of social costs. Students with reading deficits — either through dyslexia or other factors — are more likely to fail, drop out or go to prison.
.
A 2000 study found about half of inmates at a Texas prison had trouble decoding words and two-thirds struggled with reading comprehension. Mixon says her husband, who is dyslexic, works at a prison and see many inmates with reading trouble or who are functionally illiterate.

Here is another article you may read here. http://www.publicradiotulsa.org/post/state-task-force-starts-work-resource-handbook-dyslexia-other-reading-disorders

Here is another article as corroborative evidence to my findings.
https://www.armidaleexpress.com.au/story/5653753/dyslexic-man-teaches-teachers-and-parents-a-lesson/?cs=13265


"I struggled with reading, comprehension, spelling, and getting my ideas onto paper, and for a while I spent a long time in remediation and special ed classes.
"It affected my confidence; I had withdrawn and didn't want to participate in activities at school, because I didn't want my weaknesses to be shown to the classroom.
"I knew something was going on, but I just wrote myself off as dumb and stupid, because I was struggling to do the reading other kids found easy.”
Tom’s mother Marianne took him to undergo tests and assessments that showed he had a superior IQ, but she still didn't quite understand what was happening.
So she travelled to and from America, where she studied dyslexia for three years.
Within five days of Marianne returning to Australia, Tom said he was finally able to read AND comprehend.

Posted by Luqman Michel at 7:12 AM

If professors, paediatricians, psychologists or educators are not willing to accept feedback from teachers who have firsthand knowledge from having taught kids then there will be no way in which we are going to prevent depression or suicide attempts. Most of these so-called professionals only want positive comments. They hardly look and study very important suggestions from those who have concrete evidence of what they are talking about. We can only improve if we listen to what experienced people talk about. This is especially when teachers teach kids in three languages.

Here is something I read on LinkedIn supporting what I have written above.
By
Karen Cruise

When a year 10 boy you’ve been coaching for 3 months - with self confessed ‘disruptive behaviour’ in class for the last 3 years - comes to a session today sits down, looks me in the eyes and says “Miss, Ive been thinking about our discussion last week about choices & consequences, and I’ve decided.......I don’t want to be a kn*bhead anymore, I’m going to change”, you know your job is almost done!! ��

So, so proud of him (even showed leniency for his colourful language ��)

I would bet that the boy was disruptive to 'avoid shame'.

Here is another comment from a parent in a blog which supports my findings.

"The teacher in Primary1(age5 ) said you could have an adult conversation with him, the other kids just didn’t get him…by age13 I’d say he was practically suicidal, school hopeless, no friends etc.we took him out and homeschooled( not really done much here in UK) We did an American High SChool diploma online. He’s now at college in the U.S.,and has hundreds of friends!!

Thanks for the update you have nicely covered this topic. keep it up I am sharing http://nexter.org this blog here for more news updates on daily basis !!

Thank you, Charles Christian, for your valued comment. Wish you
well.