Ministry of Education of Singapore and Malaysia 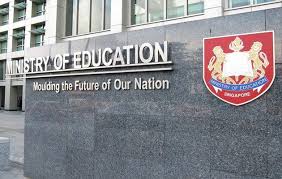 Molding the future of our nation? What future?

I wrote to our Malaysian Minister of Education and his deputy several times.

AND then I wrote to both of them again together with their team members. I have yet to receive a response from them.

I wrote to MOE Singapore and immediately received a response from them.

Therein lies the difference between our MOE and that of Singapore.


I decided to write to MOE Singapore on the suggestion of my friend who said that Singapore places great importance on Education.

Unfortunately, the Education Ministry of Singapore is manned by people who are also probably sitting on their brains. They are not capable of making sound decisions and are unable to evaluate arguments and reasoning.

I gave detailed explanation as to why many smart kids leave school as illiterates. I am aware that I am the first person to have discovered that kids predisposed to shutting down do indeed disengage from learning to read because of confusion.

What would I expect the MOE of Singapore to have done?

I would have expected them to use their critical thinking in evaluating what I have written to them.

Of course, for that they have to have a little logical and critical thinking ability which they clearly lack.

What they should consider is the fact that what I am saying is not a matter of opinion. It is based on what I have observed and learned from my past students whom I have ‘interviewed’ over the years.

MOE Singapore asked me to refer to the producers of the TV programme – Baby TV. This was the same response that I received from Astro Malaysia.

If MOE had used critical thinking and evaluated what I had written would they have referred me to the producers?

Doesn’t MOE Singapore have any educators whom they can refer my question to?

Does MOE Singapore want to know the answer to the age old question on why smart kids leave school as illiterates?

For readers who want to read my emails to MOE Singapore, please read on.

The response form Singapore MOE to my initial email was as follows:

My response to them was as follows:

Dear Ms.Karen Goh,
I am disappointed that this is the response from MOE, Singapore.

We have been barking at the wrong tree for decades stating that kids
are unable to read because of phonological awareness deficit. I challenged this more-than-35-year-old theory back in 2010. Now, this theory had been debunked.

You may read my articles on the internet including the following:

I have also determined that the more than 60 kids I have taught since 2004 who came to me unable to read in English but were able to read in Malay and Hanyu Pinyin was because they had been confused because the teachers in schools taught the wrong sounds of alphabets.

Thorndike had said in 1913 that kids will refuse to learn new things when what they had learned initially does not reconcile with what they have learned subsequently. This, I have learned applies to kids predisposed to shutting down (fortunately for the majority of kids they learn regardless of the way they are taught.)

I know why many smart kids leave school as illiterates and one of the main reasons is that they are taught the wrong sounds of alphabets.

If the MOE of Singapore does not know that the sounds of alphabets in the video I have shared is wrong and will cause kids to shut down then I do not know who else to approach.

To say the least, I am very disappointed with your response.

Thank you once again for your prompt response.

I am saying that this programme is being aired in Singapore and is detrimental to kids who listen to it.

The sounds of alphabets are taught wrongly and that is the main reason many kids leave school as illiterates.

Consonants should not have extraneous sounds.

You are from the education department and you are telling me that the programme aired on Singapore TV - Charlie and the Alphabets - is proper to be aired.

You have suggested that I should write to the producers which I have already done.

My email to them and their response are in my blog.

The issue is not whether you are able to express an opinion or not. The issue is that Singapore is airing this programme which is definitely not teaching alphabet sounds correct.

If the Education Department of Singapore cannot say how sounds of alphabets are to be taught then something is drastically wrong with the Education ministry.

I am telling you, and you are requested to discuss with knowledgeable educators in Singapore, that kids predisposed to shutting down will disengage from learning to read when they are confused.

Initial input (what a child learns initially) is important and kids predisposed to shutting down will disengage from learning to read and these are the kids simply classified as dyslexic when in fact they are instructional casualties.

Here is a video teaching the correct sounds of alphabets.

Here is another website teaching the correct sounds of alphabets.

This is also explained in detail in the book 'Equipped for reading success' by Dr. David Kilpatrick.

Please compare the two videos above with what is being aired in Singapore.

Please respond before I bring this up to higher authorities and to the press.

Posted by Luqman Michel at 4:09 PM

Previously, I have written a post on confirmation bias. This could be what the MOE Singapore is suffering from. Confirmation bias is when people would like a certain idea to be true and they end up believing it to be true.

In 2010 when I challenged the age old theory that ‘Phonological awareness deficit’ is the cause of kids being unable to read, no one was willing to listen. Similarly, the MOE Singapore wants to ignore evidence and information I have gathered over the years because it is something new and contrary to current believe.

I would have expected MOE Singapore to be more open and receptive to all ideas and arguments.

I would have expected them to examine my claims, the logic of my claims, my reasoning and all my evidence.

I would have expected MOE Singapore to remain open to the possibility of changing their view on an issue when logic and evidence supports doing so.