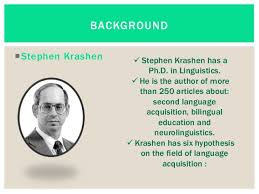 This guy wants to change an axiom into a hypothesis.
Recently I happened upon something written by Stephen Krashen which I disagree with. I made some comments in a blog post where both of us are members. In fact, that blog post is exalting him as another ‘God of education’. I have already written about the other ‘Gods of Education’ in my posts on my blog.

There must be a virus spreading in the US which makes most US citizens believe everything and anything said by anyone with the title Dr regardless of how stupid he may sound.


In an article of his, he had said that “the main rivals to the input comprehension hypothesis are the skill-building (phonics) and the comprehensible output hypothesis.”

My response: What a whole load of Bull! Imagine this coming from someone who is professor emeritus of education at the University of Southern California, Los Angeles.

How does he think that kids, who learn the correct enunciation of alphabets and then read books with a little help from teachers and parents, read and write?

How dare this guy talk about phonics when he does not know what the sounds of the alphabets in the English language are.
Posted by Luqman Michel at 5:24 PM