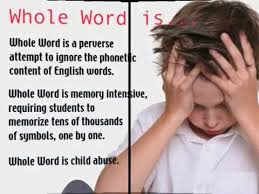 Here is a recent FaceBook discussion between Stephen Krashen and me.

Luqman Michel: "Stephen Krashen, Let us start with the same question I have asked Claire Walter above. Are phonemes in the ABC song above taught correctly?"


Stephen Krashen "I don't know why this is relevant to anything, but the song gives ONE pronunciation for each letter. And yes, we can easily find words in which this pronunciation is correct, but we can also find words that give a different pronunciation for some of the letters. But letters are not phonemes. In phonology phonemes are represented by letters like this: /p/ - the phoneme /p/ has no pronunciation but its allophones do, depending on the environment they are in. Eg /p/ is pronounced [ph] (aspirated, with a small pulp of air] unless it appears after another consonant, as in spot. Why is this relevant to becoming an independent reader after listening to lots of stories?"

My comment now: Please remember that this Stephen Krashen is Professor Emeritus of the University of Southern California. AND he says that there is nothing wrong with the sounds of the letters above. As such, the letter F' is to be pronounced 'Fer/fuh' and letter 'K' pronounced as 'Ka'.

It is exactly because sounds of alphabets are taught as in the clip above that kids shut down from learning to read. This is why this guy says that he will try his best to change teaching phonics from an axiom to a hypothesis.

He has managed to get quite a large crowd to follow him including a big group of teachers in India.

Luqman Michel: Thank you. As I have mentioned, listening to lots of stories helps a great deal in a child acquiring vocabulary and reading comprehension. As mentioned we don't need research to prove that. I repeat what I have written above - "What, I don't agree with and know is untrue is 'children who hear stories become independent readers after only four years, while most students cannot reach this level after six years of instruction.' A majority of kids will become good independent readers but the kids prone to shutting down will not if they had been taught sounds of alphabets as in the clip above.

Stephen, this is relevant because you do not understand that a majority of kids leaving school as illiterates are instructional casualties. Imagine a kid who is predisposed to shutting down/ disengage from learning to read when subsequent information taught to him is not consistent with what he has already learned. Thorndike said this in 1913. I believe his theory is applicable to only the kids prone to shutting down. Teaching children sounds of alphabets the way it is taught above is how sounds of alphabets are taught in most schools around the world - thanks to the USA who started it and now spread by the UK as well.

This is relevant because many kids will not learn when they are confused. The 'Reading war' has been going on for decades because phonics is not taught correctly.

This is relevant because all children will learn to read much earlier than 4 years if phonics is taught properly. They will progress faster if they are then read to which will enhance their vocabulary and comprehension. The problem has never been phonics but the wrong way of teaching it. You can easily get independent readers within two years if you teach phonics correctly and read lots of stories to them. (To be continued)

Posted by Luqman Michel at 2:43 PM