‘When government is wrong, it is dangerous to be right’ (Voltaire) 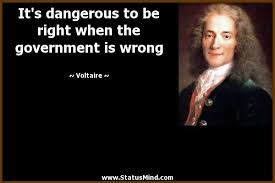 I have been writing to Reading Reform Foundation of UK of which Mona McNee is the founder.

Here are a few extracts of emails from Mona to me in 2015. Read it carefully and it may explain why no one wants to discuss why many smart kids are unable to read.

“I am 92 next month and failing daily -eye sight, and have been deaf for 60 years so now I merely exist.
Thank you for your help. Keep fighting for phonics based on 26 letters>sounds which works for all.”
“I am delighted to hear of your fight.
Remember I myself thought it was just look-say vs phonics. The Evils behind all this must be very clever.”

My comment: I stopped writing to the lady above in 2015 because she was almost blind and I did not want to burden her.

Yes, there is a big force behind wanting to keep smart kids from learning to read. It is rather strange that many institutions around the world do not discuss this matter openly or in private. Professors from the UK and the US prefer to be thought of as naïve rather than discuss matters openly.

This reminds me of a Tamil proverb which says ‘Pinch the baby and rock the cradle at the same time’. பிள்ளை யயும்  கிள்ளி விட்டு தொட்டிலை யும் ஆட்டி விடு தல் This is what the British are now doing with the programme that it is broadcasting in over a hundred countries. They teach the wrong sounds represented by letters of the alphabet which leads to kids predisposed to shutting down to disengage from learning to read (pinch the baby) and then classify these kids as dyslexic and prescribe everything you can think of to ‘cure’ this ‘condition’ (rock the baby).

“Voltaire wrote that when government is wrong, it is dangerous to be right.  Had significant people among teachers known of this, and that stopped them objecting?”

My comment: Could this be why many educators on LinkedIn agree with me in private but do not comment on my posts on LinkedIn?

“And if they want proof, the illiteracy rate continues 1 in 4 as before!  And people like Jeni Riley (Is she still at the London Institute?)  will lose face when finally it is accepted that "important" people are wrong!"

My comment: Man landed on the moon in 1969 but even as of now millions of kids are leaving schools as illiterates. Mona said ‘people will lose face’ and that is what I wrote on Face Book about the Ministry of Singapore and their kiasu/kiasi attitude.

“Richard Freeman (Ulster) got the sack for successful teaching, about 5 years ago.”

For 80 years or more, UK teachers have been mistrained. The wrong teaching has been forced into university teacher training and all LEAs.  It is evil quite unimaginable.  I have only grasped what goes on these last 6 years.

My comment: Teachers are continuing to be not trained correctly. There are many YouTube videos teaching wrong sounds of alphabets and they have been there for years. Now, the British have brought it into the homes of more than 100 countries and no one seems to care about it.
Posted by Luqman Michel at 5:57 AM