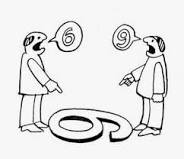 What can we take away from all of this? In all conversations, we need to seek to establish common values and desired outcomes. If our values or desired outcomes do not match theirs, we are wasting our time and theirs. Reframe the intended conversation or choose another candidate. We must consider ways in which we can authentically establish credibility and trust. We must be mindful of our own blind spots and biases. We must avoid an ‘us versus them’ mentality. We must consider how we are communicating. Are we telling people what to do, or worse, telling people they are wrong, or are we seeking to collaborate and develop a shared vision or outcome? Are we turning people off before we have even gotten started?

My comments: Very well stated. Allow me to write a few thoughts from a different perspective for the purpose of pondering instead of just accepting what is written by the author.

The desired outcome of what I write on is for educators to think.

iii.                 how it is possible for the majority of kids to be able to figure out how to read despite being taught the pronunciation of phonemes of consonants with extraneous sounds.

My desired outcome which is to reduce illiteracy, I believe, would match every educators and parents’ desires.

My own blind spot, I guess, is expecting all educators to put the interest of kids and parents foremost.

My blind spot could also be expecting others to be able to ditch what they have stated for years when new information contradicting their beliefs are presented.

There probably are many more blind spots that I am unaware of.

Initially, I never considered the ‘us versus them’ mentality. I thought that educators/researchers will be pleased to hear what I have discovered.

I was seeking to collaborate and develop a shared vision or outcome with all those I wrote to. I have had very good discussions with Dr. Joe Torgesen, Dr. Richard Selznick, Professor James Chapman, Dr. David Kilpatrick and many others. With Prof. James Chapman we agreed to disagree but the discussions were civil.

However, there were those with whom my comments/ discussion via emails did not go as one would expect it. Here are just a few of the many

1.       Dr. Andrew Jackson, after several email exchanges turned around and asked for my credentials when I pointed out to him as courteously as possible that he was using extraneous sound to consonants.

2.       Dr. David Boulton disconnected me from LinkedIn for asking very relevant questions. He had the audacity to say that he avoided advocating solutions so as not to be dismissed as having an agenda other than learning deeper into the challenge.

i.                     It is wrong for teachers to teach kids the pronunciation of phonemes of consonants with an extraneous sound. There is no two ways about this.

iii.                 It is wrong to mislead people by stating things that are not factual. It is wrong for such people to block another for exposing similar fraudulent statements.

iv.                 It is wrong to accuse someone of writing emails containing explicit sexual contents when one has not written an email to that person.

How else am I supposed to state the above ‘wrong doings’?

I like to call a spade a spade and move on from there.

If telling people, the truth ‘turns them off’ then so be it. I am not here to please every Snow, Summer and Sara.

With regard to ‘Reframe the intended conversation or choose another candidate’, I believe I do not have to choose any candidate. Back in 2010 I wrote many articles and comments on the internet disagreeing with the more than 35 year old theory that it was phonological awareness deficit that was the cause of kids being unable to read. No one accepted my hypothesis. However, doctorate students carried out a study and did research reports. Similarly, I believe there will be some researchers who will come up with research reports to state that most students are unable to read due to being taught the pronunciation of phonemes of consonants wrongly.

It is difficult to change the minds of old folks but young minds that are not prejudiced will investigate this matter and come up with reports.

Posted by Luqman Michel at 4:00 AM