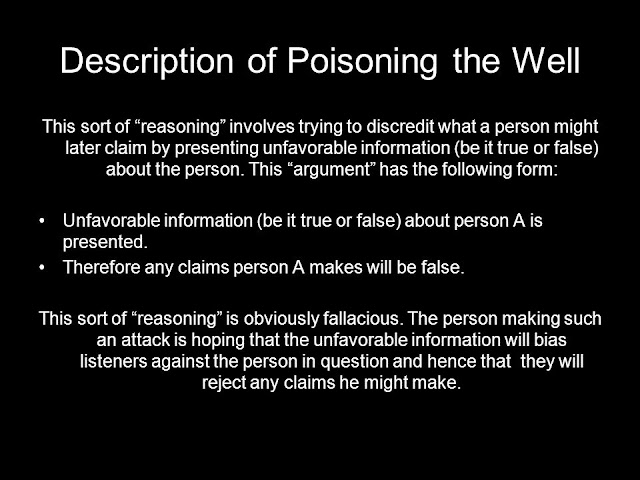 The origin of the term lies in well poisoning, an ancient wartime practice of pouring poison into sources of fresh water before an invading army, to diminish the attacking army's strength.

Poisoning the well is analyzed as a tactic to silence an opponent violating his right to put forward arguments on an issue both parties have agreed to discuss at the confrontation stage of a critical discussion. It is concluded that it is a special form of strategic attack used by one party in the argumentation stage of a critical discussion to improperly shut down the capability of the other party for putting forward arguments of the kind needed to properly move the discussion forward.

A number of twitters keep attacking me for whatever reason that only they know. I have no qualms in mentioning them by name and here is one of them, Sara Peden.

I am not her competitor and as such I do not know why she attacks me when she feels like it.

I'm saying you keep asserting same point over & over. Doesn't matter how many experts agree that of course phonemes must be taught proper but point out that's by no means solution 4 all children (as you keep implying &/or stating). You'll keep asserting it is. Awesome arrogance.

Let me explain. I keep saying that the most important matter that needs to be done to end the reading wars is to find out the reasons why kids shut down from learning to read. By shut down I mean kids disengage from learning to read due to confusion. I have many pieces of corroborative evidence on my blog to support my findings.

I have listed three reasons why kids shut down.

Can she or any of her friends tell me why it is not a solution for all children who shut down from learning to read due to confusion?

Can she, or anyone else, tell me any other reason why kids shut down from learning to read?

We have to solve this problem first before dealing with all other matters that are important for being a fluent reader.

This is the Holy Grail that scientists/educators have been seeking for decades. This is what will end the reading wars.

Many Twitters keep saying that teaching the correct pronunciation of phonemes of consonants is not the only important matter and that there are many others matters. What they don’t understand is that kids shut down/ disengage from learning to read. Once they have shut down they are not interested in any matters with regards to reading.

Then I tweeted the following:

Tell me @SaraJPeden, if everyone knows this then how is it that after 10 years of me harping on this, many schools around the world are still teaching consonants with extraneous sounds?

You don't understand why kids shut down from learning to read do You @SaraJPeden?

Why do you say that teaching the correct pronunciation of phonemes of consonants is not the solution for all children?

Would you or @buckingham_j care to elaborate?

Then Sara Peden responded as follows:

I didn't say everyone knows it. I said that the experts know it *and* they know that it isn't the *only* cause of word level reading difficulties.

Who are the experts? Did you read my post at https://dyslexiafriend.com/2020/06/foundation-for-further-learning.html.

No one's arguing about correct phoneme pronunciation being foundational. Necessary but not sufficient.  It isn't we, who've repeatedly explained this, who have a hard time understanding. We've perfectly understood your argument & rejected it, given all the research refuting it.

My comment: Notice the usage of the word ‘we’. A few of them gang up together and start clicking ‘like’ when one of them tweets.

Is there any research refuting what I have been harping on?

Tell me @Sarapeden why have you and your gang rejected it?

The reading wars have been going on for decades because of 3 matters that I have explained in my blog.

Why do you think it has been going on for so long @SaraJPeden?

Why is sharing what I have learned from my own students arrogant?

The plural of anecdote is not *data*, *evidence* or *proof*. It isn't sharing your anecdotes that is arrogant. It's your belief that you know better than anyone else, including reading experts from around the world, when your view is very narrow, that is arrogant.

Give me a few names of reading experts around the world.

I have communicated to a few and have shared what they have confirmed.

Show me one expert that you know of who has tested kids in a few languages and observed and interviewed them.

Just one research report that refutes what I have said on my blog. You may comment on my blog post at https://dyslexiafriend.com/2020/04/morpho

This was her response:

Because it's hard. And it's hard for any number of reasons (not just one). Done with you now given that you're back to giving directives that come across as misogynistic. Good night (where I am).

She left the discussion and never did respond to my questions.

Posted by Luqman Michel at 5:48 PM

Anonymous Matthew Harrison,
I have moved your comment to the appropriate forum and answered it there.

I wish you well.

Here is a comment I mistakenly transferred to my blog at 'Luqman's Musings'
Luqman MichelSeptember 3, 2020 at 4:40 AM

Another 2 comments transferred from Dyslexia Blog on 3.9.2020.
Blogger Summer said...

Why can’t you just leave women alone. People can disagree with you without you staking them and vilifying their views on your ridiculous blog. I’m fed up.

Summer, Yes, people can disagree but I have the right to post what has transpired.
Again, it was Sara Peden who came into my space and started to say all those matters written above.
Anyone is now at liberty to question me on the facts as above and not make wild accusations like you are making now.