Tamil does not require the same phonological awareness as English (DR. Kathryn Garforth) 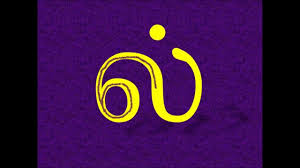 I don't have the time to become an expert in Tamil, but it is my understanding that it typically represents words at the syllable level and not the phoneme level which means that, like Chinese, it does not require the same level of phonological awareness.

I do not want to travel down this road as it diverges from my main theme of my blog posts but since it has been twitted I think I should say a few things and hope Dr. Garforth will give us her views once her busy period is over.

The English Language on the other hand has 5 vowels and 21 consonants.

I wonder who fed Dr. Kathryn the information she tweeted.

This is akin to saying the English language is at syllable level based on the following examples.

Having taught my students, the word family ‘at’ and then combining it with ‘ch’ to form chat; ‘sp’ to form spat; ‘br’ to form brat; can I then say that English represents words at syllable level?

A student studying Tamil has to combine the consonants to the vowels to form the syllables. This is similar to combining the sounds represented by the letters ‘a’ and ‘t’ to form the word/ sound ‘at’ and then teaching a student the words bat, cat, fat, hat etc. Please refer to my lesson on word family ‘at’ here.

The following is just a sample of how complicated Tamil can be and it is not as easy to learn to read and write as suggested by Dr. Garforth above.

The letter க, for example, may be pronounced as the allophones k ɡ x or h, according to where it appears relative to other sounds in a word.

Many of the letters in Tamil have diacritic marks which, if omitted, gives a completely different meaning to words and sentences. Here are 2 examples to illustrate my point

Here are two sentences with just one diacritic mark (a dot on top of a single letter) omitted which changes the meaning of the sentence.

She did not go to office because of delirium / influenza.

She did not go to office because of the arrival of Janani.

There is power in the body.

There is muck/ dirt in the body.

Here is a video of the 3 different sounds of the letter ‘L’ in Tamil. Most Tamil speaking Indians cannot even distinguish the difference. The other problem is as to when to use which ‘L’ in a word. There are many other similar letters in Tamil which makes it not as easy to learn to read and write in Tamil as portrayed by Dr. Garforth above.

Posted by Luqman Michel at 5:52 AM

The consonant ழ் is unique to Tamizh language. The name Tamizh is written like this: தமிழ். The ழ் is not same as L. That is why a special combination of zh is used to write ழ்.Likewise we use l to represent ல் and L to represent ள்