Promotion without mastering the 3R’s (Part 2) 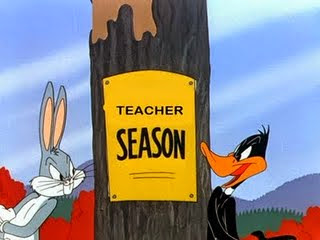 Author: “However, some things are beyond a teacher’s control.
You have no control over: Kids who have emotional or mental disabilities and have not been diagnosed yet.”

My comment: I can’t disagree with that. However, there are many things that are within a teacher’s control.

Author: “I wish I knew who actually came up with the 3Rs. They were brilliant beyond their years. They understood that there is a basic foundation for teaching that has to be in place for learning to occur.

….. most administrators are not aware of what works and have no compelling reason to seek it out. Finally, it's easy to blame the child as if s/he were the problem, and not the failure of instruction.”

My comment: Without the first R – Reading-, the other two R’s (wRiting and aRithematic) are difficult to attain.

The kids are the ones blamed almost all the time. They are blamed as being stupid, lazy and disruptive. Having observed and having discussed with disengaged students whom I have been teaching for more than 10 years I KNOW that they had shut-down because of teachers who had taught them wrongly. They had shut down due to confusion. (This is supported by Malcolm Gladwell in his book ‘The Tipping Point’).

Most of the kids who are disruptive are kids who are rowdy in order to avoid shame. They try and take away the attention of the teacher from asking them to read.

Many of these kids end up in the school-to-prison pipeline. Many people blame educators, accusing them of pushing out students who score lower on standardized tests in order to improve the school’s overall test scores. And some blame overzealous policing efforts.  You may read about it in the following two articles:

Ponder as to how in 2015 prison inmates beat Harvard students in a debate.
http://edition.cnn.com/2015/10/07/living/harvard-debate-team-loses-to-prison-inmates-feat/index.html

Comment from Mr. A: “…the thing that saddens me here is there seems to be no clear cut answer for change. I know that it is very political and involves both power and money to make the change.

The problem is to give motivation to the child to do homework every day.

As simple as ABC and as easy as one two three! So many research and studies have been done but the problems get even worse...
We have to stop talking about this and stop the train wreck of educating our students!”

My comment: Mr. A above has a method of teaching which I believe is the answer to eradicating illiteracy. (I saw only one sample lesson. But like a rough translation of an Indian saying ‘one grain of rice is enough to determine if the whole pot of rice has been cooked properly’.

What I had listened to is this: https://www.maloneymethod.com/

My question is as to why this method or something similar can’t be replicated in all schools. I have been writing the same thing again and again like a ‘broken record’ (only the old folks here will exactly understand what this means. When a record is scratched the same thing will be repeated until someone moves the needle of the record player) Most kindergartens and grade one teachers all over the world are teaching kids the wrong sounds of alphabets which in turn disengage these kids from learning to read.

I am not quite sure of it being ‘political and involving money for change’ to be made. If teachers make a concerted effort to learn to teach kids the proper sound of alphabets, a majority of kids who are predisposed to shutting down will not disengage from learning to read.

I am going to continue writing about this until the cows come home.

The author: “I appreciate the comments. I agree...we do need to stop talking about it and do something. That begins with each of us doing our part and educating the educators above us.”

My comment: Yes! How are we going to educate the educators above us?

For a start if about 20% of the teachers here in LinkedIn complain to YouTube about the videos that will definitely disengage kids predisposed to shutting down we will be able to terminate these YouTube accounts which are detrimental to kids learning to read.

Note: I have managed to terminate two such videos this month with my persistent complaint.

Posted by Luqman Michel at 8:31 PM