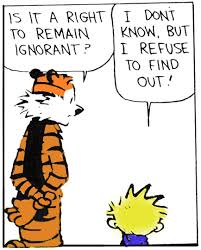 The blind see what they want to see.
DAN BROWN, The Da Vinci Code

There is little hope for us until we become tough minded enough to break loose from the shackles of prejudice, half-truths, and downright ignorance. The shape of the world today does not permit us the luxury of soft-mindedness. A nation or a civilization that continues to produce soft minded men purchases its own spiritual death on an installment plan.
MARTIN LUTHER KING JR., A Testament of Hope

These ‘professors’ refuse to comment or just ‘disconnect’ you when faced with facts that are against their opinion.

They use what little they know to tell you off regardless of the fact that what they say is completely irrelevant to what you have said/commented/questioned. (I will give solid evidence of these in my future posts)
Intelligent people are born to think and introduce new ideas and not to curb ideas presented to the world.

WHY would these guys want to remain ignorant – why be willfully blind?


On entering this world our starting-point is ignorance.
None, however, but idiots remain there.
HORACE MANN, Thoughts


Below is a Ted Talk by Margaret Heffernan which I think is worth listening to. It sure has answered many of the questions that have been bugging me.

Condensed: It is a story about a woman named Gayla Benefield. She was puzzled as to why her parents died at a young age and found that the whole town was being slowly poisoned by vermiculite which is a very toxic form of asbestos.

When she figured out the puzzle, she started telling everyone she could as to what had happened. But she was really amazed. She thought, when everybody knows, they'll want to do something, but actually nobody wanted to know. In fact, she became so annoying as she kept insisting on telling this story to her neighbors, to her friends, to other people in the community, that eventually a bunch of them got together and they made a bumper sticker, which they proudly displayed on their cars, which said, "Yes, I'm from Libby, Montana, and no, I don't have asbestosis." But Gayla didn't stop. She kept doing research.

“The truth is, this is a human problem. We're all, under certain circumstances, willfully blind. What the research shows is that some people are blind out of fear. They're afraid of retaliation. And some people are blind because they think, well, seeing anything is just futile. Nothing's ever going to change.”

Posted by Luqman Michel at 4:58 PM

Good painting.I really enjoyed reading this.I simply cherished your description.Your writing style is ideal. custom essay writing service I like the manner you express your ideas approximately painting.searching forward on your extra works.thanks so much for sharing this submit..

Thank you for your comment Joseph. The image is not mine. I took it from the net.
Wish you well.