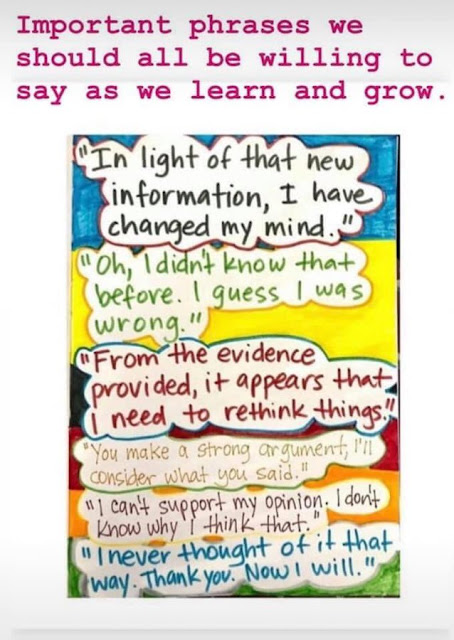 What is it that gets in the way of saying any of the phrases above?
A lot of time could be saved by saying 'sorry, I made a mistake' and moving on. Instead of that I have heard all kinds of excuse which exposes the stupidity of some of these twitters and so-called educators who stand by what they have said come hell or high-water.
This is the current situation I am facing in having written a post on the importance of teaching kids to learn letter names.
This is exacerbated by professors who say things without a thought. Dr. Jonathan Solity was quoted by John Walker in his post. The following is what Jonathan Solity had apparently said;
‘Teaching both [letter sounds and names] potentially confuses children and doubles the amount of information they are required to learn.’
How do students in Chinese schools in Malaysia and Singapore cope with learning the letter names and then the different sounds represented by letters in Malay, English and Han Yu Pin Yin (Mandarin written in Roman/ Latin letters)? This is in addition to learning to read about 600 Chinese characters by the end of primary one.
I have tweeted and tagged Johanathan Solity and he has not responded.
Read my post here and do read the comment section where I have copied some of the tweets.
How do we end the reading wars if teachers/educators/scientists refuse to budge from what they have said.
Posted by Luqman Michel at 3:14 PM

Here is an excellent example of some of these people who somehow feel they know it all.

I have been saying this for the past 10 years. Teach the correct pronunciation of phonemes of consonants and every child will learn to read.
Read my posts at http://dyslexiafriend.com

One woman from somewhere called Narelle Daffurn tweeted the following in response:
Narelle Daffurn
@narelledaff
·
Aug 11
Correct? Seriously? I’m surprised by your comment. Which accent and dialect is the correct one for students learning to read and spell in English? We live in a highly globalised world where there are many Englishes with different word pronunciations. You know that!

I responded with the following tweet:
Luqman Michel
@luqmanmichel
·
Aug 11
Seriously, I would like to know a little more about dialectal differences in the pronunciation of phonemes of consonants.
If you want to know how phonemes are taught wrongly read my posts at http://dyslexiafriend.com and then ask me questions.

@RurbsOz
and
@smh
don’t live on Twitter - no need to insinuate I am not able to respond. Here’s an article you might like - link below. Consonant sounds are also impacted when speakers have English as an additional language. There is no correct way to pronounce words.

@RurbsOz
and
@smh
You remind me of a Tamil proverb. Having fallen flat on one's face one says the sand did not touch one's mustache.
I did not talk about words, so stop putting words into my mouth. My post below is specifically for people like you
https://dyslexiafriend.com/2020/08/ego.ht

Like the saying goes they open their mouth and confirm they are stupid.