Meaning of shut down kids 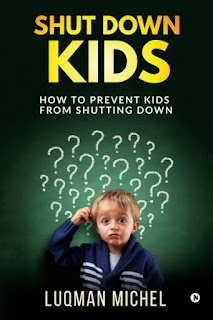 In 2018, when I wanted to write a book based on what I had learned from my students since 2004 I searched for a title. I decided on ‘Shut Down Kids’ based on Shut Down Learner written by Dr. Richard Selznick.

When I say ‘shut down kids’ it is not derogatory in any way and just refers to the fact that about 20% of kids around the world disengage from learning to read when they are confused. These kids are then classified as dyslexic when in fact they are instructional casualties. These are the kids who leave school as functional illiterates.


On November 11,2021 a member whom I met on Twitter sent me a copy of a book written by a dyslexic, Mike Thomas entitled ‘The successful dyslexic’.

Mike is the third person I know to use the words shut down on kids.

Here are a few excerpts from the book which supports what I have been writing since 2010.

If possible, we need to go back to this “Critical Period” in order to address all of the factors that lead up to the initial “failure”. Looking at the lessons being taught at the time the child experienced this first critical failure will help us understand and determine the specific kinds of dyslexic problems the child was facing at the time. It may have been the first presentation of the ABC’s, or maybe a problem in arithmetic. It may have happened much later, perhaps when the child is called on to read “See spot run” and is unable to sound the words out.

Sometimes the student may simply shutdown, feeling it is safer not to even try in class. Some may cover up their fear that they may be discovered (“They are going to find out how dumb I am”), by being the showoff, becoming the “class clown”.

“Sometimes the student may simply shutdown,

feeling it is safer not to even try in class.” (Mike Thomas)

(The highlighting of words in bold above are by me.)

Yes, the above is exactly what most of these confused kids decide to do. We then conveniently classify them as dyslexic.

The following are a few actual examples of kids who had shut down from learning to read and are successful readers now.

i.                    My first student could not even read a single sentence after completing a year in kindergarten and a year in primary one. Read the short notes accompanying my YouTube video at https://www.youtube.com/watch?v=TaBDWefwRnk

iii.                 Here is an article of a grade 4 student from Kenya who was classified as dyslexic whom I taught to read after listening to a video clip of her pronouncing the sounds represented by letters. https://www.dyslexiafriend.com/2020/07/my-student-from-kenya-part-2.html#more

iv.                 Here is a Twitter discussion with a mother/teacher from Victoria Australia who was distraught that her son was unable to read despite having had one year of structured synthetic phonics via a scripted program

Here is a Tweet by the mother/teacher above on Twitter: Alanna Maurin Dec 28, 2020 Replying to @PamelaSnow2@DTWillingham and @EdinspireGeoff

Here is an article on why kids shut down from learning to read by Dr. Richard Selznick.

Here are a few extracts from the article.

Understanding the formula of shut-down learners

Understanding this formula will help parents of children like Emma and Jacob be in a better position to take appropriate action.

Cracks in the foundation

Cracks in a child’s learning can usually be identified as early as preschool and kindergarten. Indicators during this period are easily identified: Does your child have trouble learning letter names and their sounds, for example? By first grade, is your child taking steps toward blending sounds? In middle to upper elementary school, is writing a laborious, often agonizing process for your son or daughter?

If the answer is yes to these questions, it does not necessarily follow that your child will become a shut-down learner. However, like cracks in your house that expand if unaddressed, it is important to act to prevent academic cracks from widening. Otherwise, they will contribute to discouragement over time and a child ultimately shutting down.

Dr.Richard Selznick is a qualified Pediatrician who informed me (and I have written this in my book, Shut Down Kids) that a majority of his patients (kids who are brought to him for checking why they are unable to read) sound out the consonants with extra sounds. (Extraneous sounds).

Note: Coincidentally, I happened to read the words 'Former Reluctant Learner' a few minutes ago on a Tweet by Philip Mott.

Posted by Luqman Michel at 4:25 AM