A Twitter discussion with Dr. Daniela O' Neill on English and its opaqueness. 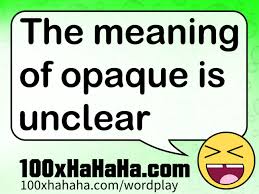 I think we actually agree. Because English is an opaque language, scientifically backed instruction that is based on how the brain learns to read is all the more important for children learning to read in English.

We all know, and I have written several articles, on English being opaque when compared with many other languages such as Finnish, Italian, Malay, etc. But I do not agree that kids shut down/disengage from learning to read because English is opaque. I have repeatedly said that kids get confused because of 3 main reasons that I have listed here.

Fortunately, a majority learn how to read after an undue waste of time figuring out how to read. About 20% disengage from learning to read and leave school as functional illiterates.

Teach kids correctly and no kid will be left behind. However, this would mean less money for intervention ‘experts’, Dyslexia Associations and others with a vested interest in maintaining kids illiterate.

Here are standard answers on opaqueness of the English language from 'educators' from my previous posts:

The Anglosphere have a standard answer to this question as responded by Dr. Valdine Bjornson on a Zoom presentation in October 2021 organized by Dyslexia Canada Org. She gave the same answer as has been given by so-called researchers for decades – ‘English is an opaque language’. Everyone who reads that statement swallow it hook, line and sinker because some researcher had reported such. LINK.

Dr. Valdine Bjornson, requested me to email her when I asked the question on opaqueness live on the zoom presentation but did not respond to my 2 emails.

Where did Mark Anderson get that insightful information from?  Does he really believe his own statement or had he copied it from some article he had read somewhere? Someone writes it somewhere, Mark copies it, Kathryn quotes it, Valdine Bjornson says it and so do many other 'experts' including Dr. Daniela O'Neill and it becomes the gospel truth.

Here is yet another post on opaqueness of the English language.

To say that dyslexics are unable to read because of the opaqueness of the English language is an insult to the intelligent of these kids. My first student who could not read a single sentence after going to kindergarten for a year and finishing primary one, attended his graduation ceremony on 30.9.21 at the University of Southern Australia. He graduated with a double degree. You may read a little more about him on my blog post written in 2010.

The following are the tweets between Dr. Daniela and me.

I read a tweet by Dr. Daniela O'Neill @daniela_oneill about some talk by IDA Ontario.

I then tweeted the following:

Perhaps @daniela_oneill will be able to find out some of the answers to my question to @IDA_Ontario I asked. LINK

The English language has one of the most complex orthographies to read & spell of any language. It has what is called a "deep/opaque" orthography, which means it doesn’t have transparent 1-to-1 correspondence btwn sounds (phonemes) & letters that represent them.  2/x

It's a more difficult & lengthy process to learn to read when a language has an opaque orthography (English), & there are often different pronunciations for same spelling pattern, than a language that has a transparent 1-to-1 orthography (Finnish) & doesn't have this 3/x

Thank you Daniela for the trouble you have taken to explain. I wish others would respond in like manner so that we may be able to discuss and understand further.

I believe opaqueness is an excuse given by the western world. After reading hundreds of articles since 2004 & observing and interviewing kids I have since taught to learn why they were unable to read, I have realised that it has nothing to do with English being opaque. It has all to do with kids being confused with teachers not telling them the many different sounds represented by letters. All that is required is for teachers to tell kids that the letters in English represent more than one sound. I have addressed the 3 main reasons why kids disengage from learning to read. Do listen to the videos and then let us continue with this discussion.

Here are the videos:

To say that kids disengage from learning to read due to English being an opaque language is insulting the intelligence of human beings.

Thank you once again and I wish you well.

(Note: I hope she and her IDA Ontario friends will listen to the above videos and question me. It may be more difficult to read in English than in other languages but no kid will disengage from learning to read because letters represent more than one sound. I am talking about why kids shut down/disengage from learning to read in English and not about English being more or less difficult than other languages.)

Here is one of the links Dr.Daniela attached:

Here is a relevant sentence from the above link:

The beginning reader of any alphabetic language basically needs to learn to associate letters with sounds in order to access whole-word phonological representations of known words (Grainger and Ziegler, 2011).

I repeat the same question I have asked several times since 2010 – how is a kid to associate letters with sounds when teachers teach letters with extraneous sounds?(This, of course, has nothing to do with opaqueness of the English language.)

You may read more about Dr.Daniela here.

Daniela O’Neill is a professor of Developmental Psychology at the University of Waterloo where she directs the Children’s Communication Lab.

She is the developer of the Language Use Inventory (LUI), a standardized parent-report assessment of children’s early pragmatic language development used by speech-language pathologists and researchers around the world. Over 15 translations of the LUI are underway.

Posted by Luqman Michel at 4:22 AM