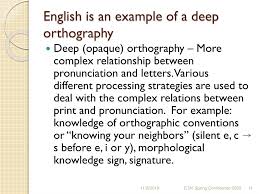 This is a continuation of my tweets with Dr. Kathryn Garforth.

Dr. Tell us what is so complex about learning to read simple sentences in children's books in English. Very simple stories. Why do about 20% of kids disengage from learning to read?

Why does a majority grope in the dark until they figure out how to read?

Oct 12 This is what I was talking about @luqmanmichel

Let us first see the definition of opaque.

What exactly does "transparent" and "opaque" mean?

If an opaque language is one where each grapheme corresponds to more than one phoneme, then what is it that we need to teach kids?

The answer is obvious to me and that is what I have said on my video here. Tell kids that each letter (grapheme) represents more than one sound (phoneme).

Kids are capable of understanding this and need to be told this at the onset. Otherwise, they will have to figure it out as do a majority of the kids and waste a lot of time in the process. Unfortunately, about 20% will shut down/disengage from learning to read due to confusion.

We need to ask ourselves as to how almost all the kids who go for intervention are able to read after a short period of intervention? Did the opaqueness of the English language become transparent with intervention?

There are many teachers who insist that one should not teach the individual phonemes (Sounds) of graphemes (letters). I believe that this together with some teachers saying that letter names should not be taught are two big mistakes. Listen to my video here on why teaching letter names is important.

For instance, how is a kid who has not been taught letter names going to read the words ‘ace’, ‘deep’, ‘eat’ when he has only been taught ‘a’ is for apple; ‘d’ is for dog; and ‘e’ is for elephant?

Almost all my students had been confused with letters representing more than one sound but were able to excel in school after their confusion was cleared by me explaining that most of the letters in the English language represent more than one sound.

Posted by Luqman Michel at 5:06 AM