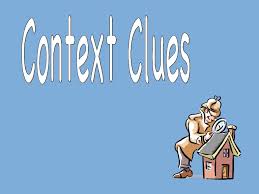 Everything that a reader has ever seen, ever done and ever read previously should be brought to the reading at hand.

By the end of chapter 27 students should be able to read well using phonics and sight words they have memorised. That would be the time to teach them to use context clues (also known as context cues) to figure out unfamiliar words.

The context is the words, sentences and ideas that come before and after a word. Context clues are bits of information from the text that, when combined with prior knowledge allows you to decode an unknown word and decide the meaning of unknown words in the story or article you are reading.

There are some who disagree with using context clues and I think that is kind of silly. Why not use everything available to make reading easier.

As most of our vocabulary is gained through reading, it is important that we are able to recognize and take advantage of context clues.

i. The bandage was wound around the wound.

ii. She shed a tear because she had a tear in her shirt.

iii. The insurance was invalid for the invalid.

Sometimes you won't understand every word in a reading passage. One thing you can do to figure out new words is to use context clues.

Context clues are useful when your child has an oral familiarity but has not read the word in print.

Here are a few examples and I believe you can think of many more.

When your child read the story ‘Treasure island’, there is a possibility that he will read the word ‘island’ as is land. However, when he reads the passage and comes across the sentence, ‘The boat went around the island’ he will be able to use context clues to read the word as ‘island’. You may then explain to him that there are many words in the English language where some letters are silent.

From the sentence ‘My father planted seeds in the soil’, your child will be able to sound out the word ‘soil’ but he will be assured that the word is ‘soil’ from context clues.

Assuming a student has learned the family words but, cut, gut, hut, jut etc and assuming he has not been taught the word put, he will be able to pronounce this word correctly by using context clues.

Another excellent example of using context clues to decipher a word is the following sentence.

I drove down a windy road. After miles of twists and turns, I was getting giddy. Using phonics we can read the word windy in two ways but when we use context clues we know exactly what the word is and how it should be pronounced.

The use of context clues can be one way to improve students' reading skills. Realizing that a text can be understood in a general sense by using context clues can go a long way towards helping students cope with increasingly difficult texts.

Posted by Luqman Michel at 4:11 AM