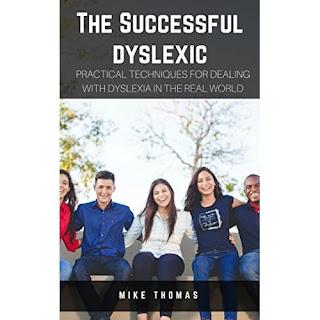 This book is written by Mike Thomas who is a dyslexic.

Here are a few extracts and my comments/questions which I hope Mike will respond to.

The second time through the 4th grade I started listening more closely to what the teacher was saying and focusing harder on the material I was studying. As a result, I did start to get a little better at reading. Sure, I was still very slow at reading, but now I tried concentrating on memorizing exactly what each word sounded like as I was looking at it; linking the sound of the word with the image of the word.

This seemed to work, but I had to literally hear every word in my head as I read it to know its meaning.
I thought that was just the way everybody read, hearing each word in their heads as they read.

Mike repeated his grade 4. It was then that he realised he had to link the sound to the word. This is quite different from linking the sounds represented by letters to the word.

For instance, when I went back and worked through all the English workbooks for reading and spelling, I finally under-stood for the very first time that in addition to Letters having Names... Letters have Sounds. This was a great revelation. I had somehow missed this fact in the first, second, and third grades. I guess everyone just assumed that I already knew it because they did.

Next came an even more startling idea: the sound a letter makes depends on the other letters around it. Finally, after all these years, I understood what my grandmother meant when she said, “Just sound it out.”

To most people, the fact that letters have sounds is a pretty basic concept that kids are taught in the 1st and 2nd grades, yet somehow, I didn’t learn it until I was 19 and in college. I was in disbelief; I had to ask myself, “What happened”?

It was not until I took classes in Learning Disorders at UCLA that I finally understood the reason that I didn’t know letters had sounds: I was “dyslexic”. That was a word I had never heard until the summer of my junior year in college. UCLA was on the cutting edge of the study of all types of learning disorders, including autism and dyslexia.

I believe most kids are also confused but they somehow figure out and begin to learn to read through patterns and analogies as stated by me several times in my blog.

“I understood what my grandmother meant when she said, “Just sound it out”.” I doubt if Mike understand that even as of today. Many people have learned to read without knowing how to sound out letters. Listen to my video at https://www.youtube.com/watch?v=IGGr4uyFdn4

Mike was probably being never informed by his teachers that almost all the letters represent more than one sound. I have listed this in my video at https://www.youtube.com/watch?v=AZnesY8O5kI

It is good to have this confirmation from a dyslexic himself. I have written several articles on why kids misbehave in school. The main reason is to avoid shame.

If possible, we need to go back to this “Critical Period” in order to address all of the factors that lead up to the initial “failure”. Looking at the lessons being taught at the time the child experienced this first critical failure will help us understand and determine the specific kinds of dyslexic problems the child was facing at the time. It may have been the first presentation of the ABC’s, or maybe a problem in arithmetic. It may have happened much later, perhaps when the child is called on to read “See spot run” and is unable to sound the words out.

Once this critical failure occurs, a pattern of failure after failure is put in motion. All too often, this pattern of failure when trying to get the meaning of a lesson, leads to failure on the tests. The next thing that happens with this constant pattern of failure is that it leads to an unconscious withdrawal from the learning process. The feelings of “I’m just not smart enough”, self doubt, self loathing, and low self esteem often lead to anger. In extreme cases, this anger may even lead to self destructive behavior, from being accident prone, to cutting one’s self, and even suicidal thoughts or actions.

Sometimes the student may simply shutdown, feeling it is safer not to even try in class. Some may cover up their fear that they may be discovered (“They are going to find out how dumb I am”), by being the showoff, becoming the “class clown”.

This is exactly what I had discovered from my students and from reading hundreds of articles since 2004.

Yes, ‘Shut Down Kids’ is the title of my book. A majority of the kids classified as dyslexic are in fact shut down kids and they are instructional casualties. They would have been able to read just as well as any other kid if they had not been confused by teachers teaching the wrong pronunciation of the sounds of consonants – the critical point or initial failure as Mike puts it.

Just as dyslexics are people with a learning disability…

No matter the severity of our dyslexia, I believe all people with symbol processing problems should be able to be understood and treated in a similar fashion.

Mike too has been influenced by the internet to say that dyslexics are people with a learning disability. I disagree with him. These people are instructional casualties.

Posted by Luqman Michel at 6:02 AM