Do We Need a New Definition of Dyslexia? 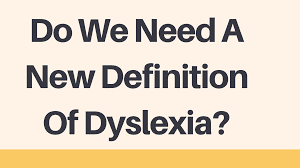 Curriculum casualties, of which there are millions, could be virtually eradicated…(IDA)

International Dyslexia Association and National Institutes of Child Health and Human Development’s definition of dyslexia is:

Dyslexia is a specific learning disability that is neurological in origin. It is characterized by difficulties with accurate and / or fluent word recognition and by poor spelling and decoding abilities. These difficulties typically result from a deficit in the phonological component of language that is often unexpected in relation to other cognitive abilities and the provision of effective classroom instruction. Secondary consequences may include problems in reading comprehension and reduced reading experience that can impede growth of vocabulary and background knowledge.

The following is extracted from the International Dyslexia Association website. LINK.

Dyslexia is a language-based learning disability. Dyslexia refers to a cluster of symptoms, that results in people having difficulties with specific language skills, particularly reading. It is referred to as a learning disability because dyslexia can make it very difficult for a student to succeed without phonics-based reading instruction that is unavailable in most public schools.

If dyslexia is a language-based learning disability why are kids able to read in many languages including Italian, Finnish, Malay, and many other languages? It is high time that we change the definition of dyslexia.

Lee Kuan Yew, the founding father of modern Singapore who was said to be a dyslexic, used six languages – English, Malay, Latin, Japanese, Mandarin and Hokkien. He was fluent in English, Mandarin and Malay.

I have written several articles on the fact that many kids taught phonics still leave school as functional illiterates. It is nonsensical to say dyslexics cannot succeed without phonics-based reading instruction. All children will be able to read fluently if not confused by teachers teaching them wrongly.

Can individuals who have dyslexia learn to read?

Yes. If children who have dyslexia receive effective phonological awareness and phonics training in Kindergarten and 1st grade, they will have significantly fewer problems in learning to read at grade level than do children who are not identified or helped until 3rd grade. 74% of the children who are poor readers in 3rd grade remain poor readers in the 9th grade, many because they do not receive appropriate Structured Literacy instruction with the needed intensity or duration.

My comment: What do these guys mean by ‘individuals who have dyslexia’?

Read about the kid who had ‘Structured Literacy Instruction’ for one year and was still unable to read. Link.

Why/how was he able to read after a few days of his mother teaching him the correct sounds represented by letters?

The following is what the mother wrote on Twitter:

He had stomach aches to go to school.

He cried when I got the tricky words out to practice.

I have spent two weeks just getting him happy to read some words from picture books (like hop on pop) with me and to do some writing from a Kumon writing book.

After just two lessons he is now asking me to help him read words from packages, from his games and he now sounds t p b l f d correctly every time. (The 2 lessons are the lessons from my blog)

Why has there been no response to the question ‘if there are any studies on this’?

The above was what was said some 45 years ago and was debunked around 2015. Read my post on why it cannot be phonological awareness deficit that is the cause of dyslexia. LINK.

The above millions of instructional casualties are what my blog posts are all about. What is it that has been and is still being poorly instructed with regards to decoding? Why is this hardly ever discussed or debated on?

“Secondary consequences may include problems in reading comprehension and reduced reading experience that can impede growth of vocabulary and background knowledge.”

This part of the definition is a no-brainer. Since the dyslexic person can’t read, how is he to gain vocabulary and do comprehension?

Posted by Luqman Michel at 5:49 AM