Despicable behavior of some British and Australians 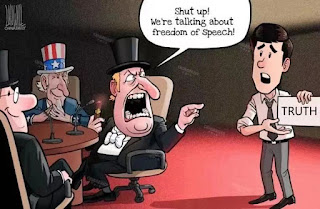 Recently I created a second account on Twitter and saw the following tweets from Peter Blenkinsop from the UK.

Just seen that the ONLY person I have even blocked, @luqmanmichel, has written a blog about me and Dylan Wiliam. I am very pleased to be attached to Dylan. In the blog Michel distorts the truth as he did in our twitter exchanges. Good to be consistent.

Why would Peter block me and then tweet about me knowing I will not be able to respond?

If Peter or Dylan think I have distorted the truth, then they should state what it is that I have distorted. The comments on my blog are not moderated. Any comment by anyone will be allowed and I will respond.

Here is my post on Dylan Wiliam and those are actual tweets by me which he or any of the other 16 in that group could have responded to.

I repeat some of the questions here:

ii.                  What does your research say about not teaching kids consonants with extraneous sounds? Do you think we need evidence/ research reports for something as obvious as this?

Are teachers that naive to believe everything they read on the internet?

As a researcher, @dylanwiliam, do you know of this claim that has been circulating since 2018?

The above are questions which need answers. How are we going to eradicate illiteracy if we do not question those whom we expect to have an answer?

Here is another tweet by Peter Blenkinsop after having blocked me.

He, @luqmanmichel, is a thoroughly nasty man. He believes he knows better than anyone else and has THE answer. The only person I have ever blocked.

This reminds me of what Dale Carnegie once said ‘‘any fool can criticize, complain, and condemn—and most fools do.”

No one in the world knows all the answers to everything but I believe I know why kids disengage from learning to read and that is basically what my blog posts are all about.

What other reasons are there for kids disengaging from learning to read other than what I have discovered from my students. LINK.

We all know the traditional definition of ‘sight words’ and I have used this definition in my posts until I read another definition.

Peter asked me what I mean by sight words and I asked him to read it in the two books by Dr. David Kilpatrick where he explains both the traditional meaning as well as the meaning used by researchers.

Peter insisted that I should provide him the answer.

Here is part of the tweets (Actual tweets which I copied before Peter blocked me). You may read the rest here.

When you and I scan a word we just read it as a sight word. We don't need to sound it out.

What does that mean, Read it as a sight word?

Every word we are reading now which are familiar to us is a sight word. We see it and are able to read it.

Do you have a link to research that says this? Not your opinion blogs but actual research papers?

Yes, Peter. They are in Dr. David Kilpatrick’s Books. Get a copy of both the books and I will guide you to the pages.

You will have to properly explain what you mean by sight words and how we read them.

OK. As you like it. Let me educate you on what is sight words first. Traditionally, when teachers say “sight words,” they are referring to high frequency words that children should know by sight.

We often define sight words as words that kids can’t sound out – words like; the

Reading researchers have a different definition of sight words.

A sight word is a word that is instantly and effortlessly recalled from memory, regardless of whether it is phonically regular or irregular.

A sight-word vocabulary refers to the pool of words a student can effortlessly recognise.

If you understand this, we can continue. Your understanding of sight words is what is traditional.

And what is the mechanism for it to be 'effortlessly, recalled from memory? Is that a phonic process?

Firstly, do you agree with the definition above?

I can only agree or disagree if you explain effortlessly and the mechanism you believe allows that to be achieved.

It is not a phonic process? Is that what you are asserting?

One step at a time. The definition is by scientists; it is not mine. That is one of the meanings of sight words. I have used both the traditional and the scientific meanings in my blog posts. So any word instantly recalled is a sight word. All the words here are sight words for us.

We don't need to use phonics to recall words that are familiar.

You are just wrong. Did you watch even the 2 minute Dehaene video? I expect you did not.

I had already told Peter that I have listened to Dehaene’s video more than 10 times since I first saw it a few years ago.

Instead of thanking me he tried to corner me by asking me for an opinion on Dehaene’s video. I then decided to listen again and have posted an article on it here.

I believe scientists and researchers should be careful of what they say or write. Not everything that a scientist or researcher says is the gospel truth. Many of the things they say should be pondered upon and accepted only if they make sense to us.

Peter insisted a number of time for me to listen and comment on Dr. Stanislas Dehaene’s video. I listened and have given my opinion but Peter has yet to comment on my post and says I am a nasty fellow for calling a spade a spade.

Today, 9.4.2022 I commented on my own post about how a deaf person said she learned to read. Please read the comment section on my post on how the brain learns to read.

There are some (not all) from the UK who don’t know their history. We gained out independence from the British way back in 1957 and some of these guys still think they are our colonial masters.

Note: The above tweets were on March 22 and March 23 in a group where there were 16 present including Timothy Shanahan and Dylan Wiliam. There were no tweets from any of them on this matter on sight words. Timothy Shanahan posted an article on sight words and high frequency words on 2.4.2022 which you can find here. I will comment on Timothy's post when I find a little time.

"If I were to try to read, much less answer, all the attacks made on me, this shop might as well be closed for any other business. I do the very best I know how – the very best I can; and I mean to keep doing so until the end. If the end brings me out all right, what's said against me won't amount to anything. If the end brings me out wrong, ten angles swearing I was right would make no difference." – Abraham Lincoln.