Excuses instead of fixing the problem - Dylan Wiliam 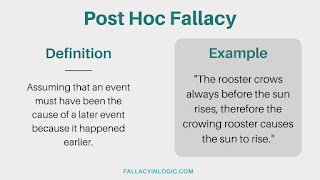 This is a Twitter discussion where we were discussing whether to teach letter names. Dylan Wiliam joined in in response to my tweet as follows.

Singapore, Macau and Hong Kong were in the top 4 positions in the PISA test while the UK was in 13th followed by the US. Why are we arguing about teaching letter names when it takes just a short time to teach the alphabet song?

Dylan Wiliam @dylanwiliam Replying to @luqmanmichel @ManYanaEd and 16 others

I suppose you realize that this is an example of a "post hoc ergo propter hoc" argument. And until we control for the vastly greater amount of private tutoring in the jurisdictions that you cite as performing higher on PISA, such arguments are just silly.

Luqman Michel @luqmanmichel Replying to @dylanwiliam @ManYanaEd and 16 others

Tell us, Dylan, why the illiteracy rates have not been reduced in decades?

I have no idea. I just know a fallacious argument when I see one.

This is not my first encounter with Dylan. Many a times I had asked him questions and he will not respond.

Post hoc ergo propter hoc is an informal fallacy that states: "Since event Y followed event X, event Y must have been caused by event X."

In our case here Dylan is attempting to convince us that students from Singapore, Macau and Hong Kong are faring better than the UK students because of tuition. This will give the impression that those in the UK do not send their kids for private tuition.

These guys are always looking for excuses instead of trying to fix the problem.That is one of the reasons why the illiteracy rates in the Anglosphere has not reduced in decades.

Your profile says you are a researcher. What does your research say about not teaching kids consonants with extraneous sounds? Do you think we need evidence/ research reports for something as obvious as this?

Tell me Dylan, if consonants should not be taught with extraneous sounds?

Let us assume that it is a post hoc fallacy, tell me, Dylan, why a country where the majority speak English is having many who are unable to read in English as compared with a country where a kid has to learn to speak and read in 3 languages.

I tweeted the above as out Educational Consultant Peter Blenkinsop from the UK wants evidence that consonants should not be taught with extraneous sounds.

Our education guru, Timothy Shanahan, had also asked the same question on Twitter sometime back.

I then decided to question Dylan further with the following tweet.

Is there any teacher here who can show a list of 10 letter sounds that a child can learn and thereby read 26,000 words? Read my post at https://dyslexiafriend.com/2022/03/can-learning-10-sounds-of-letters.html

Are teachers that naive to believe everything they read on the internet?

As a researcher, @dylanwiliam, do you know of this claim that has been circulating since 2018?

Any idea what the motives of the people listed in my post are?

Note: Dylan Wiliam is a British educationalist and Emeritus professor of Educational Assessment at the UCL Institute of Education. Research interests: Education; Known for: Assessment for learning.

Posted by Luqman Michel at 5:31 AM