How to say sorry and move on - argument on sight words 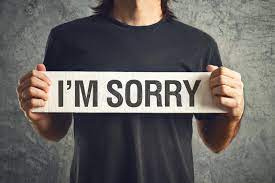 I have always found it easy to say sorry when I have made a mistake and move on. Once I say sorry the matter will not be dwelt on.

Here is a recent example of a mistake I made on Twitter and when was informed by an education consultant, Peter Blenkinsop, I apologised and moved on.

Compare that with what Peter Blenkinsop does. This is a long post for posterity. I may include this in my next book but you may read the parts highlighted in red.

Michel. I think you do not understand the convention on Twitter. I was asking Gina not you if she had the sounds on YouTube.

Sorry, my friend. That is why I include names. I find it confusing otherwise.

Look at the first person in the name list and the question is aimed at them.

Thank you, my friend. Now, I have learned something new. So, old dogs can be taught new tricks too. Happy Days!

Here is the second part:

How many words could we learn, purely by sight?

Every word here I know to read by sight.

I don't teach kids whole word/language. I teach them phonics. I have said this all along.

When you say 'by sight' what do you mean? You recognise the shape as a whole?

For goodness sake. You really do not know? All words are read by sight by all of us. That is one of the scientific definition of sight word reading. We do not recognise words by shape. The mind is capable of reading words from left to right at a fast speed.

Right given you know that what is it that we do to read a word? What do we read and how does that allow us to read the word? What is the mechanism?

Peter, I have said several times on Twitter and in my posts - No one in the world knows how children learn to read. Absolutely no one. You don't care to read and keep saying the same thing. I know why children disengage from learning to read and no one wants to discuss that.

You know. That is an enormously arrogant position to take.

OK. I don't know what you mean by saying no one knows how children learn to read? Is that a comment about what happens in their brain or something else?

You might need to check out current brain research into activation when we read.

I am afraid I don't have time for that.

My comment now: I said that I don't have time hoping he will drop that matter. I have read many articles and listened to videos on brain activation.

I cannot answer it on a Tweet. Sorry, my friend. It is not as simple as you think. Do you know how a kid learns to read?

My comment now: See how this consultant continuously avoids questions.

OK. Step by step. 1. When a reader scans across a word, left to right in English, what do the eyes focus on?

Can you not explain the first step in what happens as we scan a word?

When you and I scan a word we just read it as a sight word. We don't need to sound it out.

What does that mean, Read it as a sight word?

Now, it is my turn to say, you are behind in your reading research work. Every word we are reading now which are familiar to us is a sight word. We see it and are able to read it. Knowing the sounds represented by letters to read words is one way...

Do you have a link to research that says this? Not your opinion blogs but actual research papers?

Yes, Peter. They are in Dr. David Kilpatrick’s Books. Get a copy of both the books and I will guide you to the pages.

So you need 2 books to explain what you mean as a sight word?

No! I have explained it in my blog posts. But you won't read it. There are a few pages in the books that explain it clearly.

You have not EXPLAINED, you have asserted and provided no evidence other than telling me to read your endless blogs.

My comment now: I really don’t understand a guy who calls himself a consultant insisting on me to provide evidence on what a researcher has stated in his book. I was beginning to wonder if the virus has affected this guy's brains.

I have asked you to provide one expert/ scientist/ researcher who says that they know how children learn to read and you have not.

Some learn through patterns and analogies as do most kids when they pick up reading in grades 4 and above.

So despite you saying no one knows how children learn to read you are now claiming you do know. Crikey, you are more brilliant than all the scientists in the world.

You will have to properly explain what you mean by sight words and how we read them.

"Our brain becomes adept at processing and our experience is that of hearing words but actually our brain is processing sounds (phonemes) and putting them together so we hear words.

"When we read the same process is in operation. Our brain is processing one sound at a time but we perceive it as a whole word."  So you reject this?

This constant avoidance of explaining what you mean is very suspect.

Note: Peter send a link to a video by Dehaene. I don't quite agree with our brains processing sounds so we hear words. I shall address this in another post.

You don't have to respond, just watch the videos. But you won't.

Peter, I had listened to the video by Dehaene more than 10 times since I first listened to it more than 5 years ago. So, let us end this debate. When you have read and understood what are sight words then you may apologise for your misunderstanding.

So no comments on the evidence presented even though it disagrees with what you believe, with no similar confounding evidence.

Do you want to start afresh from this point? One step at a time?

Messenger will be a better place as there is no limit of characters.

I'd like you to agree that Dehaene presents brain scan evidence that shows how we read words, first. Second, state what the evidence is that he presents. Third, restate your claim that we read words as wholes.

No. Twitter is fine. I like public debates, not private ones where you can be abusive and think no one else sees that.

OK. As you like it. Let me educate you on what is sight words first. Traditionally, when teachers say “sight words,” they are referring to high frequency words that children should know by sight.

We often define sight words as words that kids can’t sound out – words like; the

Reading researchers have a different definition of sight words.

A sight word is a word that is instantly and effortlessly recalled from memory, regardless of whether it is phonically regular or irregular.

A sight-word vocabulary refers to the pool of words a student can effortlessly recognise.

If you understand this, we can continue. Your understanding of sight words is what is traditional.

And what is the mechanism for it to be 'effortlessly, recalled from memory? Is that a phonic process?

No. It is not. I told you to go one step at a time. Do you understand what that means?

Firstly, do you agree with the definition above?

I can only agree or disagree if you explain effortlessly and the mechanism you believe allows that to be achieved.

It is not a phonic process? Is that what you are asserting?

You have to use phonics here because some of the words are not in your memory bank. Do you understand this?

So Dehaene is wrong in the evidence he presents from fMRI studies of the brain?

One step at a time. The definition is by scientists; it is not mine. That is one of the meanings of sight words. I have used both the traditional and the scientific meanings in my blog posts. So any word instantly recalled is a sight word. All the words here are sight words for us.

Do you think words are stored as wholes in our brain?

You are jumping around like a monkey without answering questions. Sorry, I cannot continue with this nonsense.

I understand that you are utterly wrong. The reason I can't read some of those words is that they are not familiar to me. They are not in my vocabulary. Thanks to phonics I can make some attempt at sounding them out.

So, do you agree that we don't sound words out when the words are familiar to us?

I do not agree, but we don't sound out via our voice. The process for familiar words is so rapid it gives the impression of instantaneous. If you don't understand this then your knowledge is at least 10 years out of date.

Peter, we don't even sound them out in our brain. We read at a fast speed but they are automatic because they are sight words. We don't need to use phonics to recall words that are familiar.

You are just wrong. Did you watch even the 2 minute Dehaene video? I expect you did not.

My comment now: I had already told him that I had listened to the longer version more than 10 times and he still keeps badgering me.

I decided to stop responding.

I have asked on Twitter how the deaf and mute learn to read but have had no response.

How do those who have learned using whole language , without having learned phonics, learned to read?

How do kids who have been taught sounds of letters with extraneous sounds learn to read?

Does anyone really know how a kid learns to read? I am still searching for an answer.

Posted by Luqman Michel at 4:52 AM