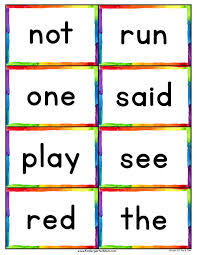 I learned quite a bit from Elizabeth Brown on a long Twitter discourse. Here are somethings she tweeted and my comments:

With 100% whole word methods, they used flashcards for everything. Now with balanced literacy, the predictable readers are used for new words, but they also send home hundreds of high frequency sight words to be memorized with flash cards.

From what I understand teachers could be using Flash Cards to get the students to memorise the high frequency words ‘globally’ as suggested by Debbie Hepplewhite. If this is what they do with flash cards, then obviously they are using flash cards wrongly.

Read some of the most stupid things I have heard from teachers such as Erin Harrington @eeharrington, Debbie Hepplewhite @debbiehepp, Pam Kastner @liv2learn, and Sue Lloyd @suelloydtcrw. LINK.

Obviously Elizabeth Brown who is against Dolch Words memorisation also believes that the only way to memorise Dolch words is to memorise them visually.

All these educators remind me of the Tamil story of the prince who caught a three legged rabbit and claimed that all rabbits are three legged.

Moreover, most schools add in sight words as wholes & leveled readers, these additions cause guessing problems in my remedial students. Most also don't teach as much phonics, they stop too soon.

I do not understand why memorising sight words will cause guessing problems in kids. I teach all the kids the sounds represented by consonants and then teach them word families with a few Dolch words to be memorised by rote memorisation during each lesson.

See how I teach Dolch words, sounds represented by consonants and phonics in my first lesson you may find here.

The notes on Dolch (sight) words in my blog post here should be read by all teachers.

Schools actually teach them if they don't know a word to guess from the first letter, guess from context. Since they learn sight words before learning phonics, they also get similar words confused because they haven't learned letters well when they learn them.

It's actually easier to undo the guessing with the other words than the sight words because they are so frequent and so many are so similar. The worst is they/them/then/than. But there are also things like:

This is what I have read on Twitter frequently but it intrigues me as to why a kid will guess the above words wrongly if he had been taught the letter names and sounds represented by them correctly.

When I first started tutoring in 1994, some schools used 100% whole word practices, no phonics at all, only words as wholes. Balanced literacy teaches some phonics after sight words. All words were taught as wholes with controlled vocabulary, adding new words after memorizing.

It appears that what Elizabeth is harping on is what happened in 1994 which is about 25 years ago.

As I have mentioned previously, we should all teach letter names and then letter sounds to kids so that they will be able to read words without having to guess.

Posted by Luqman Michel at 6:52 PM