Rayyan, a 6 year-old, reading from my book 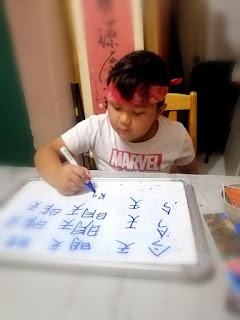 Sometime early this year, my friend N. POOLOHGASINGAM aka Huang Poh Lo, complained to me that his grandson Rayyan was unable to read in English despite all the coaching he had given Rayyan.

I then asked Poh Lo how he taught the sounds of a few consonants to Rayyan viz. b, c, f, m, t and s. He sounded all the letters with extraneous sounds – buh, kuh, fuh, muh, tuh and sir/sur.

I immediately told him that the chances are that his grandson is a ‘shut down’ kid who had disengaged from learning to read.

Poh Lo, whom I have known for 40 years was annoyed with the term shut down kid until I explained what I meant.

I had distributed all my books and could not give him a set for him to photocopy. However, I remembered that I had left a few copies with a friend when we had gone around on our presentation to teachers at kindergartens and primary schools.

I managed to get 3 sets and gave Poh Lo one set.

After a few weeks Poh Lo confirmed that his grandson was beginning to read.

Rayyan is 6 years old and is learning English, Malay and Chinese in kindergarten.

This reading should show educators such as Faith Borkowsky, who say that kids should not be taught Dolch words to be learned by rote memory, how wrong they are.

It should also show educators who constantly write that using pictures to read is incorrect. They say that when pictures are removed the kid will not be able to read. In the clip below Rayyan is reading the last page of 3 chapter with no pictures as cues/clues.

Posted by Luqman Michel at 3:04 PM