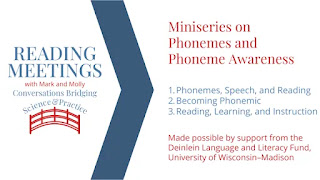 ‘Reader must fill in how to go from three discrete phone /b/a/t/ (he pronounces it as /buh/ ah/ tuh/) to one integrated syllable /bat/.

Maryellen: It is easier for certain phonemes than others. I believe phonemes including vowels and some consonants that can be stretched out a little are better for teaching kids blending so buh is hard to blend but M is mmmahhttt is an easier path to mat than bat. Different consonants have different properties that will make it more or less easy to be blended.

Mark: The properties of phonemes are such that they can’t be pronounced literally in isolation. I mean they are not parts of speech.

If Mark can still go on pronouncing /b/a/t/ as /buh/ah/tuh/ despite me writing a post on his mispronunciation of sounds represented by consonants and tagging him numerous time, how can we ever expect illiteracy to reduce. LINK.

AND our expert on speech production, Maryellen Macdonald, says what has been said by many on consonants that can be stretched. Are these so-called experts saying that consonants cannot be uttered without extraneous sounds?

If a kid in Lagos can sound out these letters almost perfectly why can’t these so-called experts do it?

Listen to a video here that enunciates the consonants the way they should be i.e. without extraneous sounds. LINK

Who is Mark trying to kid when he says: "The properties of phonemes are such that they can’t be pronounced literally in isolation. I mean they are not parts of speech."

The main problem with kids being unable to blend is due to confusion as a result of teachers teaching the pronunciation of consonants with extraneous sounds. Listen to my YouTube video explaining this.

Children learn that what is changing is the onset and what remains the same is the rime.

Big increase comes with linking sounds of words with print.

Pre-readers who learn the phonemes are then ready to learn about print and mappings between print and sound. This reasoning has led to adoption of curricula and instruction that emphasise learning phonemes as the prerequisite for learning print and phonics.

Thank goodness for this innate ability in human beings. If not for this ability of children to hearing contrasts between these words and isolate initial sounds almost all, and not just the 20%, will be functional illiterates.

Yes, ‘learning phonemes is the prerequisite for learning print and phonics’ and it is extremely important that this should be taught correctly. How does Mark and Maryellen expect kids to blend /buh/ah/tuh/ to sound the word bat?

Posted by Luqman Michel at 3:18 AM