To teach or not to teach the correct pronunciation of phonemes 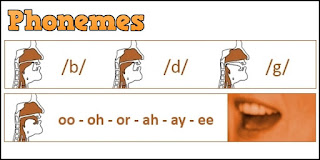 Since 2010, I have been harping on the correct pronunciation of sounds represented by letters.


Listen to the following video clip produced by the UK and see how sounds represented by consonants are pronounced. This episode is being watched by toddles in more than 100 countries in the world. Imagine the amount of harm this will create in time to come.

A kid predisposed to shutting down, or if you prefer, a kid who learns logically will shut down from learning to read when teachers teach the pronunciation of sounds represented by letters as in the clip above. Don’t forget that this comes to us from the UK. This is the country that came in 13th place while Singapore came in second in reading in English. No, not second in Mandarin but in English. Shame on the English speaking countries including the US and Australia. See my post on this here.

Do listen and see how a kid will learn phonics with cuh air buh for the word cab.
How about fur air nuh for the word fan?
Now, listen to the following video clip which teaches the correct phonemes. There will be no kid left behind if teachers teach the pronunciation of phonemes in the following manner.

Reading wars have been going on for decades because of the wrong teaching of the pronunciation of sounds represented by letters. The white man has been conning the world by talking about vocabulary, comprehension and fluency which all come after laying the foundation which is the sounds represented by the letters.
As I have said before, as far as the educators are concerned, what they (educators) cannot comprehend cannot exist. This is why the Jews/ Israel who boast about their inventions are still trying to figure out why many smart kids are unable to read.
OR could it be that these are the guys behind the dyslexia scam who actually con the whole world by saying that kids who cannot read are dyslexic?
Posted by Luqman Michel at 10:57 AM

Suggest you link to phonics programmes rather than entertainment apps
https://phonicsinternational.com/hear-the-sounds/

Thank you Blogstandard for your comment.
Who told you that Charlie and the alphabets is an entertainment programme?

Read my post on the importance of initial learning and you will realise how detrimental this is to kids predisposed to shutting down.
Here is my post of initial input:
https://www.dyslexiafriend.com/2019/02/early-input.html

It is an educational network that is going to cause many kids to shut down from learning to read.
No parent should allow their kids to watch this programme.