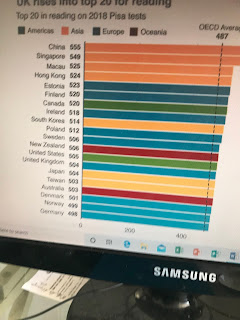 Click on the photo above for a clearer picture.

Phonics advocates keep saying that phonics is being taught in schools.

In fact, only a few schools, even in the UK, are teaching phonics the way it ought to be taught. Otherwise, the UK will not be no 14 in the PISA test and far behind China.

Here are some extracts from the article above.


There is no consensus on why the performance of struggling students is declining. Education experts argue vociferously about a range of potential causes, including school segregation, limited school choice, funding inequities, family poverty, too much focus on test prep and a dearth of instruction in basic skills like phonics.

About a fifth of American 15-year-olds scored so low on the PISA test that it appeared they had not mastered reading skills expected of a 10-year-old, according to Andreas Schleicher, director of education and skills at the Organization for Economic Cooperation and Development, which administers the exam.


The top scorers are China, Singapore, Macau and Hong Kong in that order.

Shame on the Caucasian English speaking countries - UK, US and Australia.

The education experts keep arguing on a range of potential causes which is what they have been arguing on for the past few decades.

The performance of struggling students has been declining because they are not addressing the real cause as to why they are struggling.
Posted by Luqman Michel at 3:51 AM