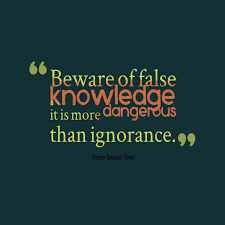 Ignorance leads to Knowledge" AND "Knowledge leads to Ignorance". (Dr.Shalini Ratan on LinkedIn)

What a coincidence that Dr.Shalini Ratan should post this on LinkedIn yesterday (23.4.2020). It supports what I had intended to write.


“With Fresh Mind you begin to Acquire Knowledge and achieve a State of Learning. You become Knowledgeable.

Interestingly, after reaching the Peak of Knowledge the "Curve begins to Flatten".
The Mind gets filled with Collated data of Past Experiences. It begins to live in an "Unconscious Assumption" that nothing more is left to Learn. You become Overconfident of your Opinions and Understanding. Your Mind to Receive gets Blocked by your own Knowledge.

"Know it All Attitude" creeps in Unconsciously, though Consciously you keep saying that no one can know everything.

So, in the first case Ignorance is "Lack of Knowledge", in the latter it is "Delusion of Knowledge". Both are two Extremes of Ignorance.

Knowledge Curve Flattens without our Awareness...
So, Pause to Self Reflect.”


The above describes exactly my experience in my discussions on Twitter as well as on LinkedIn and on blogs.

Diane Ravitch, P.L.Thomas, and Robert Slavin are the recent educators who don’t bother to respond probably because they think they have nothing more to learn and they know it all. Their minds have been blocked by their own knowledge. They believe they know it all.

On the other hand, it is possible that these are the guys working for the big boys who continue to dupe the world that all kids who are unable to read are dyslexic.

Let us now look at the Tweets by a few educators I have discussed with recently.

“Every consonant name contains an element of vowel, or we couldn't hear it. Don't think your point applies to giraffe, but the key is that a letter can represent more than one sound, and we have to know what it represents in particular words.”

Perhaps letters b and d may be difficult to be enunciated without an extraneous sound but it is totally inaccurate to say that ‘every consonant name contains an element of vowel’.

I think he really believes that there is nothing more to learn, for he will not then have said that every consonant contains an element of vowel. If he had paid attention to what I have been saying all along and listened to the video clip of the lady enunciating the consonants with no vowel sounds he would not have uttered those words. Listen to the video clip here.

Yes, his mind has been blocked by his own knowledge. He has probably been listening to consonants being taught with extraneous sounds and has begun to believe, just like most teachers around the world, that consonants have to be pronounced with an ‘element of vowel’.

Yes, the "Know it All Attitude" has crept in her mind as it has in the mind of Sue Lloyd.

Here is a tweet by Sara Peden -  Psychologist and Education Advocate.

“No doubt there're many ways some students learn to read. I think the question is more about "is there a way that makes sure all students learn to read?" Since we don't know who *won't* be able 2 learn with various methods, don't we want to teach the way all will be able to learn?”Sue Lloyd,

I then responded as follows:
Luqman Michel @luqmanmichel

“Yes! Teach all kids the proper pronunciation of consonants and no kid will disengage from learning to read.
Most children today are learning to read using analysis and that is why there is a delay in reading for them.
I have videos of kids in Australia who read all letters with an extraneous sound and yet are able to read all the nonsense words I gave them to read.
Surely they had figured out how to read.
What if we taught them the correct pronunciation from day one?”

I find that exaggerated statements like that ("no" kid will disengage) aren't helpful in improving practice, overall. When your statement is obviously not reasonable, people won't listen to the legitimate point you are trying to make.

My comment now: Why is that an exaggerated statement? David Kilpatrick had said in his book ‘Equipped for Reading Success’ that in a large study conducted by scientists from the State University of New York at Albany, researchers were able to reduce the number of children who require ongoing remediation from the national average of 30% down to 2%. In a study by Florida State University the most severely reading disabled students could reach grade level- and stay there- using a surprisingly brief intervention programme.

Siegfried Engelmann had said from his own experience of teaching that less than a fraction of 1% were unable to read.

Sue Lloyd had recently tweeted that all her students were able to read because she taught them using Systematic Synthetic Phonics (SSP).

On what basis then did Sara Peden say that my statement is exaggerated. Get educators to teach kids in kindergarten the correct pronunciation of phonemes and surely kids will not disengage from learning to read.

You obviously do not read what I have written and then make statements such as 'exaggerated statement'.
Did you listen to the 5 videos I produced for the benefit of parents with shut down kids?
I write my blog posts to share what I have learned from my students over the last 15 years.
My blogs are for any educator or parent who wants to benefit from what I have learned.
I don't expect anyone to say 'won't listen to legitimate point'...

“Did you, or did you not write "no kid will disengage"? I responded to exactly what you wrote. That, and only that, is what I referred to as exaggerated.  I believe it is.”

Yes, I did. How do we get anywhere if you do not answer direct questions?
The answer to 'no kids will disengage ' is in the videos which will take less than 15 minutes’ total time.

My comment now: She, just like most of the others, does not read the links I attach and then start commenting as if they know what I am writing about. How can anyone discuss anything without reading what the other party has written?

@SaraJPeden Replying to @luqmanmichel and @MRsalakas
“You don't appear to have understood what I am saying. IMO, people won't go to your blog post from your tweet, if you make exaggerated statements in the tweet. Just an observation.  Take from it what you like.”

Last month I had 6847 visits. There are readers from all over the world reading my posts.
Soon there will be some research students who will do reports on what I have written as they did in 2015

“That's wonderful. You might have more if you didn't exaggerate in your tweets that are trying to get people to your blog. That's all.  Bye now!”

My comment now: I have said in my blog that I am discussing only those smart kids who shut down from learning due to confusion as a result of phonemes of consonants being taught wrongly. These are a majority of kids wrongly classified as dyslexic.

I have also said that my blog does not deal with kids who have acuity problems (hearing, visual and mental problems). As such all this unnecessary waste of my time is because she had commented without having read my posts.

“No. I did not watch or read. That's because you have no credibility with me when you make
statements that are clearly not true. That is my point.”

My comment now: How is it possible for her to make all those comments when she had not read my posts nor listened to the videos I had posted?

My comment now: It would have taken her less than 15 minutes’ to listen to all my 5 videos specifically done to tell listeners why many kids shut down learning to read. She says that she did not even complete the first video.

Why would she say that what I said is factually wrong? She has completely misunderstood my message because she does not read nor listen because her mind has been blocked by her own knowledge. I am only talking about kids prone to shutting down who will disengage from learning to read if the consonants are not taught with the correct pronunciation. I have never said that this is all a student needs to learn to become a good reader. I am only talking about laying the foundation of learning to read.

Posted by Luqman Michel at 4:47 AM

Here is something I have copied from a post by Dr.Shali Ratan that applies to my post above.


It's hard to Win an Argument with a Smart person becoz they will Ask Right Questions and give Rational Responses. Agree or Disagree but it would be a Meaningful Conversation.

Most important is that they have an Intent to Converse...

It's impossible to Win Argument with a Stupid person becoz they will Ask a Question over your Question, will Pick Words from your Responses and keep creating New Questions without listening to the answer given, they will Manipulate to put ball in your court making you feel Apologetic for being Argumentative, they will begin to make Personal Remarks when they sense losing the Argument....more can be added to this..

Most important is they have No Intent to Converse. They get into a Conservation to show their Knowledge and to Prove themselves Right...