The Shameful practices of many ‘Educated’ Americans 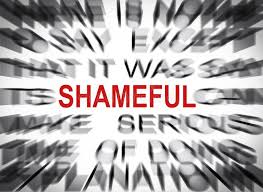 One of the most shameful practices of American Educators is the fact that they bury their heads into the ground when they are cornered by questions they cannot respond to.

Reid Lyon and David Boulton of the Children of the Code fame are just two of the many.
Timothy Shanahan ignores comments which he cannot respond too.


The latest of such Americans is Denise Olivera Schira, Director of NYC Department of Education,
who decided to cut me off as a connection when I posted a relevant comment in one of her posts which spoke about American History and Shameful practices.

She had posted an article on American History and Shameful practices.
My comment was:

“What do you mean by American History and shameful practices? Some of the current Americans are just as shameful in their practices.”

I had not mentioned any names but she deleted me from her contact list.
By cutting me off or burying her head in the soil like David Boulton, has she not practiced a shameful act? Isn’t it a shameful practice to cut off someone instead of having a discussion?

I have made many comments in Timothy Shanahan’s blog posts over the years which were never responded to. On 14.2.2020 I made another comment and have yet to get a response. My comment is relevant to what was posted by Timothy.

The good thing about Timothy is that he does not delete the comments unlike David Boulton and many others.

Tim, I have shared with you what I have learned from teaching more than 50 so-called dyslexic kids on a one on one basis as of 2017. You had said that teaching 50 kids cannot apply universally.

As of now, I have taught more than 70 such kids and still maintain, by having observed them and 'interviewing’ them, that they shut-down from learning to read because the pronunciation of phonemes of letters are taught wrongly.

The main reason why the 'Reading wars' have been going on for decades is that pronunciation of phonemes of letters are taught wrongly.

Kids shut-down when they get confused. Many kids interviewed on Children of the Code 15 years ago had clearly said that they were confused.

Why were they confused? They were confused because they could not connect the sounds of letters taught to the words they heard.

After writing about this since 2010 and commenting on blogs such as yours I have now produced YouTube videos on this and you are welcome to listen to them and decide.

There are corroborative pieces of evidence in my blog to back up my findings.

Here is my first video on why kids shut down from learning to read.