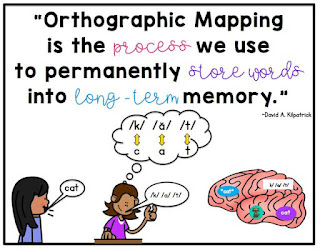 Following a discussion on Twitter I decided to refresh my mind on orthographic mapping and chanced upon the following post on an Orton Gillingham blog.

The highlight in bold is my doing and this is what I intend to write to a Dr. David Kilpatrick for further discussion.

Orthographic mapping has been known about since the late 1970s, and was first described by Linnea Ehri, when her work in the 1980s provided evidence for her Orthographic Mapping Theory. However, it only became more widely known in the 1990s, after British researchers began to work with her theory.

So how exactly are sight words stored? We know that orthographic mapping requires advanced phonemic awareness, letter-sound knowledge, and phonological long term memory. These all work together to help us produce a long term memory of the words we learn.

Sight words and orthographic sequences of letters are hooked or anchored to pronunciations of words which are already stored in our long term memory, because we learned to speak long before we learned to read. David Kilpatrick explains, “Orthographic mapping proposes that we use the pronunciations of words that are already stored in long-term memory as the anchoring points for the orthographic sequences (letters) used to represent those pronunciations.” He goes on to say that if this process is going to work well, a student will need to be proficient in their letter-sound knowledge and advanced phonemic awareness.

So how exactly does this work? Well, let’s take a word such as pin, a word that most first grade students are likely to encounter in print. It is also very likely that a student of this age has that word in their phonological long term memory, so they have something on which to map or anchor that word. However, how can they turn that unknown printed word into a known sight word, a word they recognize instantly when they next see it? The student will need to pay attention to the individual letters and sounds in that word. A student’s letter-sound skills and phonemic analysis skills will allow them to map the sequence of letters, that make up pin, onto the pronunciation they already have in long term memory.

In my previous blog, I discussed how a student would approach a word such as pin, to identify it using their letter-sound knowledge skills and their phonological blending skills. The technical term for this is phonological synthesis, which means “bringing sounds together.” To link the printed word, pin, to the the spoken word, pin, the student will need to be able to break the spoken word pin into its individual phonemes. Next the student has to match those phonemes to the printed letter sequence that represents the word pin.

If the student can figure out that pin is made up of the sounds /p/ /i/ /n/, they can match those sounds, already stored in memory, to the letters p-i-n. A student will need to identify where, in the oral word, they hear the various sounds. For example, they will need to be aware that the /n/ is heard at the end. This way they can match the phoneme making that sound to the printed letter ‘n.’ This allows the student to make connections and map the spoken word to the spelling of the printed word.

A growing body of research (see Kilpatrick, 2015) shows that once typically developing readers become reasonably proficient at phonic decoding they begin to ‘self-teach’.  This self-teaching hypothesis proposes that every time these readers encounter an unfamiliar word, they sound out the word by attending to the structure of the word. They then use this new knowledge to establish an orthographic representation of the word in their long-term memory. In typically developing readers, the storing of the word in long-term memory occurs after one to four exposures to the word.

However, unlike their typically developing peers, students who have poor phonemic awareness and phonic decoding skills do not self-learn orthographic mapping.  Rather than remembering a word after one to four exposures, these students may need twenty or more exposures. As a consequence, these students do not easily develop a large ‘sight’ vocabulary, compromising their ability to read fluently, which in turn interferes with their comprehension.

Posted by Luqman Michel at 4:38 AM