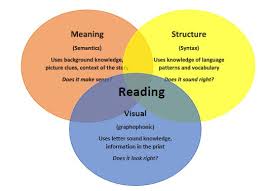 I believe most schools today teach phonics in one form or another. Unfortunately, many schools have these hard core three cueing system proponents, who have not mastered how to teach phonics correctly, who also teach kids how to guess.

Instead of sounding out words, the three cueing system proponents teach kids to rely on syntax, semantic, or grapho- phonemic cue by looking at the beginning letter of words.

When you teach both phonics and the three cuing systems, I believe the kids will choose one over the other and they more often than not choose the 3 cueing systems as it is easier than sounding out words.

It’s true that some children, in spite of how they’re being taught, learn to decode well when taught with the three-cueing system and teachers go on claiming that it is due to their teaching and the three cueing system. What about the kids who have shut down from learning to read?

Do we need context to recognize words?

I believe both Narelle Lynch and Pat Stone, both proponents of the three cueing system will be able to read many familiar words written in isolation. I don’t think they will need context to read them.

If I give a list of words including nonsense words any skilled reader will be able to read it without the benefit of context. Listen to the video clips at

For familiar words there is no need for guessing from context.

One needs context clues only for unfamiliar words to figure out its meaning especially words with multiple meanings such as wind. I teach all my students to use context clues after they have learned to decode. Please read my post on context clues at

Readers who do not have phonics decoding skills to figure out words, are the ones who will rely on context. Read my post on figuring out vs guessing at

When readers guess a word from context they do not notice the letter sequence to make that word a familiar word. They have to again rely on context when they come across that word used in other sentences. A reader when using phonics to decode will become familiar with that word.

It is students who use the three cueing system who may read horse as pony. A kid who knows phonics will not make such a mistake.

I have one question for these three cueing system proponents. How is syntax critical for word reading development? Yes, syntax is necessary for comprehension but is it necessary for decoding?

On my blog posts I have only been writing about decoding and have maintained that comprehension, vocabulary and fluency come at a later stage.

Many students learn to read regardless of the way they are taught. However, as Erin Harrington said, we should be concerned about the kids who are unable to read.

Posted by Luqman Michel at 7:13 PM