The Role of Orthographic Mapping in Learning to Read (Part 2) 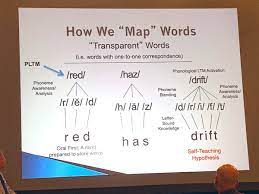 The first part on Orthographic on Joan Sedita's blog post may be found here.

How does orthographic mapping develop?

The following are extracts from the blog post found here and my comments.

Three intersecting skills must be in place to enable orthographic mapping (Ehri,  2014; Kilpatrick, 2015):

The ability to accurately and quickly decode a word by identifying its sounds letter by letter, and blending those sounds to read the word.

My comment: Anyone with a little common sense will know that the above cannot be true.

How did the students during the whole language period do orthographic mapping when they were not taught the sounds represented by letters? How did they blend sounds that they were never taught?

Young students identify the pronunciation of a word by using their letter-sound knowledge to determine each sound in the word, and then using their phonemic blending skills to blend those sounds to decode (sound out) the word.

My comment: What happens when students are not taught letter sound knowledge? How do students blend letter sounds taught wrongly by teachers?

My comments: This is a misrepresentation made for decades by those with a vested interest. Almost all the so-called dyslexic kids do not struggle with letter sound knowledge. They struggle with the confusion created by teachers who teach the sounds represented by letters wrongly.

Teach all kids sounds represented by letters without extraneous sounds and all kids will be able to blend and decode.

Here’s how Ehri (2014) explains the skills that need to be in place before orthographic mapping can take place:

“To form connections and retain words in memory, readers need some requisite abilities. They must possess phonemic awareness, particularly segmentation and blending. They must know the major grapheme-phoneme correspondences (letter-sound knowledge) of the writing system. Then they need to be able to read unfamiliar words on their own by applying a decoding strategy.” Doing so “activates orthographic mapping to retain the words’ spellings, pronunciations, and meanings in memory.” (p. 7)

My comments: I believe almost all kids have phonemic awareness skills. What most students have a problem with is not being able to connect consonants with extraneous sounds with each letter forming a word. A majority of these students somehow figure out the connections between the letters and words and are able to pick up reading around primary three and four. About 20% are left behind and then wrongly classified as dyslexic.

All these educators talk about segmenting and blending. How do we blend ‘duh aah guh’ as reported by Sally Shaywitz. How does a kid blend kuh ah tuh as taught by Liz Dunoon?

How do these kids who are unable to read become able to read at grade level after a short period of intervention?

Posted by Luqman Michel at 5:57 AM