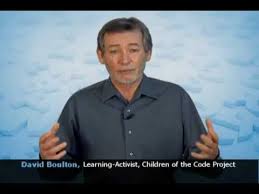 Image taken from Children of the Code.


The following is the departing message from David Boulton to me on LinkedIn in 2017.


I have been bombarded over the years with people 'certain' that if only their way was adopted (spelling reform to instructional method) everyone would be great readers. I don't have the time or interest in being the object such people want to stroke themselves with. I am clear and on the record for decades re what is the reason children struggle to read English. If as you say you have been through my work you'd know that. I appreciate that you help people. I don't want to engage further with you. I am not interested in being a platform for self aggrandizing. I wish you all the best.

After his message above he disconnected from me on LinkedIn.

As you will all have noted, I have never ever mentioned to him, nor to anyone anywhere else, of any specific way to be adopted.

There are thousands of teachers all over the world who are successfully teaching so-called dyslexic kids to read using various ways. There is no such thing as one method or way to teach.

However, I am the only person in the world who has been harping, since 2010, on how not to teach pronunciation of phonemes.

You cannot teach buh-luh-oo and say that is how to sound out blue. Thank Goodness that most students, somehow learn to read.

Many smart kids shut down as they simply cannot understand how buh-luh-oo can sound out the word blue.

How would you pronounce the following word?

Can you recognize that word? It is an English word given to us by Liz Dunnon. You can hear it in a YouTube video here: (You can hear it under skill 2 between minutes 1.48 and 3.05 in the video.)

I had written several emails to Liz to take down that video but I believe she does not understand that it is such teachings that cause kids prone to shutting down to disengage from learning to read.

I believe that David Boulton does not know the seriousness of this matter either.
Posted by Luqman Michel at 4:55 AM

Until these Caucasians, come down from their high horses, and start listening to those from countries where they speak a few languages other than English the Reading Wars will continue.

If David Boulton and Timothy Shanahan cared to listen many kids would have been speared leaving school as illiterates.