My Emails to and fro Emily Hanford and APM 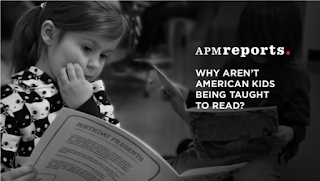 I wrote to APM reports on their article 'How American schools fail kids with dyslexia’ dated 11.9.2017.

I received a reply from Emily Hanford.

I was glad that finally, the media will raise awareness and do an independent investigation on my findings.

Thanks for writing.
Yes, you raise many relevant and important points. Unfortunately, there are not satisfying answers as to why the research is being ignored. The documentary seeks to provide some explanations and history, and to point out how important it is that schools start paying attention to the research.
Have you heard the full hour long radio documentary?

I then wrote another email to Emily after listening to the radio documentary.

Here is an extract of the relevant parts of the email on 16.9.2019 for our discussion today.

2. I don't agree with there being 10 to 20% of kids who are dyslexic. This is a fallacy. Any and every kid who can't read is lumped under the umbrella term 'dyslexia'. I have also been writing about this for many years and hopefully some universities will take this up for study.
A majority of the kids classified as dyslexic are in fact shut-down or disengaged kids.

They shut-down or disengage because they have been taught wrongly. About 20% of kids around the world shut-down when they are confused. These are the kids who like to be taught explicitly. When what is taught does not match with what they already know or have been taught they disengage from learning to read.
All these are explained in detail in my blog at: www.dyslexiafriend.com

I wrote about this in LinkedIn too. Please connect with me in LinkedIn and read my posts there.

https://www.linkedin.com/pulse/coincidence-grace-luqman-michel
Let us work together to alleviate illiteracy in US and the world.

I will take a look.
Thanks.
Emily

And that was the end.

On 3.1.2019 I decided to give her a nudge and said that the main reason why kids are unable to read is that the sounds represented by letters are taught wrongly.

She responded by saying:

These are good points and we are continuing to report.

That was in January 2019 and until now there is nothing on the most important point in my email which is; teachers are teaching the wrong pronunciation of sounds represented by consonants which is why kids disengage from learning to read.

Now, how do we connect the dots between the above emails in 2017/ 2019 and the recent tweets by Emily Hanford I posted yesterday?

Posted by Luqman Michel at 4:02 AM