The "illusion of truth" effect. 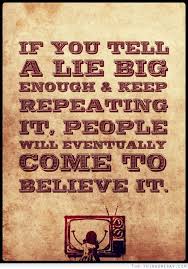 The illusion of truth is a mechanism by which one comes to believe something is true when it’s not. In fact, they don’t just believe it; they also defend it as true. Also, they close themselves off to the possibility that it might be false.


We are constantly reacting to whatever is happening around us.

The big boys with a vested interest are well aware of how the masses react to what is visible and therefore constantly feed information.

Every day I get a summary of news on dyslexia around the world. Most of the time this news is exactly the same with a few changes here and there.

Celebrities who may belong to the less than 2% who may fit the ‘dyslexia’ definition are constantly portrayed in the news.

Anyone who is unable to read then considers himself dyslexic as well.

Like the old Nazi saying goes, “If you repeat a lie often enough, it becomes the truth.” A statement that is repeated, even if it’s false, tends to be perceived as true. Most people aren’t interested enough to verify whether something is truthful or not.

Currently, we do not fear the thousands of death that occur every year but we fear death from the Covid19. This is simply because the news on the virus is constantly creating fear in our minds. The Covid19 fear will disappear if there is no news for about 1 month.

Our mind is unconsciously programmed by constant reminders of what the big boys want us to believe.

I believe this is why I am having a problem convincing parents of ‘dyslexic’ kids. They have been fed with information that their children are unable to read because they are dyslexic when in fact they are smart kids who are instructional casualties.

Science of Reading is now propagated by the people with a vested interest who want to market their products under their marketing arm, Amplify.

There are many educators who are promoting the SoR even though it has been here for more than 40 years with no known improvement in the standard of reading.

Repetition makes a fact seem more true, regardless of whether it is or not.

It seems obvious. We’re living during a time of constant propaganda and lies.

Do you think that something is true simply because you’ve heard it many times? Or is it true because you have sufficient evidence to believe it so?
Posted by Luqman Michel at 4:27 AM

Email ThisBlogThis!Share to TwitterShare to FacebookShare to Pinterest
Labels: Amplify, illusion of truth, Science of reading