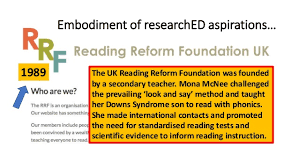 Note: The founder of RRF UK, Mona Mcnee, was a friend of mine. We had exchanged emails until the point she was almost blind and had to read my emails by asking someone to read to her. I then decided to stop writing to her.

On a tweet by Geraldine Carter on 15.6.2020 she said that she is an early member of Reading Reform Foundation and had looked at my work years ago.

That got me thinking and I remembered writing to Debbie Hepplewhite in late 2018. She had promised to discuss my findings with other members of RRF.

Questions that come to my mind now are:

I just received your message about your wish to share your experiences of teaching many students who were able to read in Malay and Hanyu Pinyin.

How would you prefer to do this?

You can write to me direct through my email address and I can pass on your experiences to my colleagues at the Reading Reform Foundation if that is helpful.
Best wishes,

I wrote an email telling her what I had learned from my students. There was no response and I emailed again as follows.

Dear Debbie,
This is a gentle reminder that I am still eagerly waiting for a response from you and RRF.
Wish you a Merry Christmas and a Happy New Year.
Luqman michel

Debbie Hepplewhite responded as follows and then I did not hear from her again.

Dear Luqman,
I am so remiss not to have got back to you on this. My sincere apologies.
Now that you have reminded me, I shall be sure to attend to this immediately after the Christmas season.
In the meantime, I do hope you and yours are well,
Warmest good wishes,


For those who are interested to read details of my email to Debbie Hepplewhite, here it is.

Luqman Michel
To:Debbie Hepplewhite
Tue, 20 Nov 2018 at 04:42
Hello Debbie,
I am pleased to hear from you.
You did comment on one of my posts in Timothy Shanahan's post
on my findings that many kids are unable to read in English because
teachers all over the world are teaching kids the wrong sounds of alphabets.
Timothy did not respond to your comment where you explained what I had
meant.
Yes, please, let me write to you and please pass it on to your colleagues and
I hope we can discuss this with an open mind for the betterment of our future
generations.
Let me give a short introduction of where I am coming from.
I have worked in the accounting/auditing field for a better part of my life.
I have been teaching kids many of whom were certified as dyslexic, on a one on one basis, for the past 14 years, and have observed them and also ‘interviewed’ them over the years even after they had left my tuition.

Since 2004 I have taught more than 60 such kids on a one on one basis and I confidently say that all these kids were instructional casualties.

These kids shut down or disengage from learning to read because they had been taught the sounds of letters wrongly.

I believe that the national average of about 30% of kids who leave school unable to read in English is mostly shut down kids. These kids are intelligent and most of them have no problem reading in Malay and Hanyu Pinyin which is Mandarin written using the 26 alphabets in the English language. However, they cannot read in English because of confusion as a result of wrong teaching by well-meaning teachers who do not know how to teach the sounds represented by letters of the alphabet.

The main reason for kids being unable to read is said to be ‘phonological awareness deficit’. This simply means that kids are unable to learn to read because they are unable to hear the sounds of spoken words.

If this is true,   how then do we explain the fact that all my students could read in Malay and those who went to Chinese schools could also read in Hanyu Pinyin, but were all unable to read in English?

As such ‘phonological awareness deficit’ cannot be the cause of kids being unable to read in English.

So why can some kids read in Malay and Hanyu Pinyin but not in English?

These kids cannot read in English because they are confused.  Therefore they shut down or disengage from learning to read in English. No amount of encouragement can get these kids to read unless their confusion is cleared.

Dr. David Kilpatrick had said in his book ‘Equipped for Reading Success’  that  “… in a large study by scientists from the State University of New York at Albany, researchers were able to reduce the number of children who require ongoing remediation from the national average of 30% down to about 2%.”

“In another study by researchers at Florida State University showed how the most severely reading disabled students could reach grade level – and stay there – using a surprisingly brief intervention program. These examples question the inevitability of widespread reading failure”

The answer to the questions above is that kids prone to shutting down disengage from learning to read when they are confused due to the wrong teaching of letter sounds.

I have written a book, ‘Shut down kids’ explaining in detail why kids shut down from learning to read. The book includes corroborative evidence to support my findings and is found on Amazon and other online bookstores.

Psychologists, doctors and teachers should stop classifying any and every kid who cannot read as dyslexic.

These doctors, psychologists and teachers want to label things they do not understand because it can take on an identity that they are not responsible for. If a child is struggling with reading and has not made growth despite age/grade/listening comprehension ability, it seems logical to these doctors/psychologists/teachers/clinicians etc to blame that struggle on something.

Teachers think the problem must be with the student. Because teachers cannot see the reason for kids being unable to read, they blame it on something no one can see – the brain - something must be wrong with their brains. It couldn’t possibly be the teachers.

Many parents who come to me use the word dyslexic because that is what teachers have told them because they don’t know what else to call them.

The education department should look at how teachers are teaching phonics in kindergarten and schools. If phonics was taught correctly a majority of kids who would otherwise leave school as illiterate would end up reading well. We need to stop searching for a label as an excuse and start teaching the way it should.

I am not disputing that many kids may have symptoms as described for dyslexia on the internet but I do know that this term is overused.

A month ago I saw a ‘BabyTV’ programme on Astro that will cause kids to disengage from learning. I wrote to Astro (our local TV) and kept getting responses that the matter has been passed on to the ‘relevant department’. Only when I wrote to the CEO of Astro more than a month later did I receive an email from someone in middle management. However, the email said that they have passed on my complaint to the producers of the programme and that the producers will contact me directly.
The way Astro is teaching phonics in the ‘BabyTV’ programme is per the link stated below, which by the way is also how many our schools teach phonics.

I wrote to a Ms Sue Lloyd recently whom I had great respect for but I am now disappointed with her response. Out of all the people in the world I would have expected her to be the last person to say that the sounds in the above video clip was correct.*

How are we ever going to reduce illiteracy if teachers who teach synthetic phonics cannot accept that kids shut down from learning to read when sounds represented by letters are taught wrongly?

For a start, Debbie, find out from your friends if the sounds of letters taught in the programme above are acceptable. I have written to the producers who are from the UK and they have said that there is nothing wrong with the programme. I believe otherwise and will do all I can to get that programme off the air.

Notes:
a.       I wrote to many professors in 2010 stating why I disagree with ‘phonological awareness deficit’ as being the cause of children being unable to read. You may read my articles by searching ‘Luqman phonological awareness’ and look for those written in 2010.

c.        In 2015 and subsequently, the theory that ‘phonological awareness deficit’ is the cause of dyslexia was debunked by new research reports.
d.      One professor who saw my post on LinkedIn has made a book review on Amazon after having bought and read my book.
Thank you and kind regards,
Luqman Michel
Note * Sue Lloyd said that the sound was not that great. I regret this mistake.
Posted by Luqman Michel at 4:47 AM