Definition of grapheme and phoneme 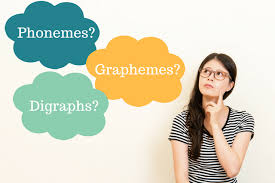 I believe I now know why I have been getting lukewarm reception of educators in the US, the UK and Australia. I believe most of them do not understand what I mean when I say that the pronunciation of phonemes of consonants is not taught correctly.

You cannot teach phonics of any kind if the pronunciation of phonemes is taught wrongly.

As such, how can one teach phonics when children have been taught the sound symbol skills wrongly?

Here is a Twitter discussion with Dr.David Dzyngier of Australia yesterday which is self explanatory.

Only some students have problems learning to read.  Let's not generalise.

Dr. A majority have a problem learning to read. Fortunately, many of them learn to read via analysis leaving behind about 20% who disengage from learning to read.
Read my post here of a student in Australia reading the phonemes represented by letters wrongly.

Eliminate the necessity to figure out how to read.

Michel I watched the videos. I think you are confusing grapheme & phoneme. My understanding is that the letters of the alphabet have NO sound only names. Correct me if I'm wrong @NarelleLynch1

Dr.  Phonemes can be put together to make words. Grapheme - A way of writing down a phoneme. Graphemes can be made up from 1 letter e.g. p, 2 letters e.g. sh, 3 letters e.g. tch or 4 letters e.g ough. Dictionary definition.

So why is the student attributing sounds (phonemes) to a lettering letter (grapheme)? Again my understanding is that the letters of the alphabet have NO sound only names.

I believe your understanding "Again my understanding is that the letters of the alphabet have NO sound only names." is incorrect.

A grapheme is a written symbol that represents a sound (phoneme). This can be a single letter or could be a sequence of letters.

When a child says the sound /t/ this is a phoneme, but when they write the letter 't' this is a grapheme.

When you teach the sound/t/ with an extraneous sound it confuses many kids who then disengage from learning to read. 1/x

Fortunately, like the student in the video, may kids figure out how to read but in the process, they waste an inordinate amount of time figuring out how to connect the sounds taught wrongly to the words taught.  2/x

ii.                   Approximately 20% of the kids around the world are unable to connect the phonemes that are taught wrongly to the words taught and therefore disengage from learning to read. These are the kids who are then wrongly classified as dyslexic.

Posted by Luqman Michel at 4:21 AM

“If children are struggling, even if they’re receiving phonics instruction, perhaps it’s because of the way they are being asked to focus their attention on the sounds within spoken words and links between those sounds and the letters within visual words,” he said.

“We can direct attention to a larger grain size or a smaller grain size, and it can have a big impact on how well you learn.”

The above was written by a Stanford Professor Bruce McCandliss. He too does not understand why some students receiving phonics instructions are struggling.

In fact, no professor has figured out why phonics instruction is not working as well as it should.

I hope researchers will keep an open mind and get teachers to teach the correct pronunciation of phonemes.