How to memorise Dolch words (most frequently used words) 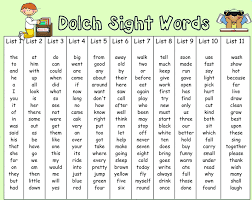 Edward William Dolch derived a list of most frequently used words in the 1930s. The Dolch list includes conjunctions, prepositions, pronouns, adverbs, adjectives and verbs; it includes 220 words. He referred to these words as “tool” or “service” words because they are used in all writing regardless of subject matter.


I teach my students phonics and get them to memorise the Dolch words and they are able to read simple sentences from day 1. You may refer to my first lesson here.

I get my students to learn the Dolch words by rote memory.

Rote memory has been used in primary and secondary education for over a century, and it is still the primary way that many subjects are taught in schools around the world.

Rote memory is a technique for learning in which one repeats facts or figures over and over again to instill them in their memory banks. Some examples of rote learning include repeating the multiplication tables, repeating state capitals, or spelling tricky words.

I used to be able to quote many Bible verses for many years but I have forgotten almost all due to disuse. However, I still know my multiplication tables as I have continuously used it during my work in the accounting field.

As for the Dolch words, having memorized them it is not forgotten as the words are read again and again as these words are in any book a child reads. There is no book without the words the, and, be, to, an, it, at, on etc.

Stop listening to phonics proponents who insist that Dolch words should not be taught.

You may want to read a testimonial from a mother of one of my students who came to me in 2018.

Posted by Luqman Michel at 4:12 AM

Here is an article written by Jennifer Buckingham and Anne Castles at https://www.nomanis.com.au/post/why-do-some-children-learn-to-read-without-explicit-teaching


When a word has been viewed and read many times, it becomes stored in long-term memory and the reader can then retrieve its meaning directly from print, without going via the phonological pathway. They have a stored memory of the spelling of the word in their brain that allows them to recognise it rapidly regardless of its size, font, case, or colour. Fluent recognition of words via this pathway reduces cognitive load, allowing the reader to focus on comprehension in the broader sense of both literal and inferential meaning.

The following is extracted from https://medium.com/mind-cafe/how-to-retain-and-remember-more-of-anything-youll-ever-learn-768c31be131d

How Do You Avoid Losing 90% Of What You’ve Learned? Repeat to Remember

“Repetition is the mother of learning, the father of action, which makes it the architect of accomplishment.”

People learn or remember better by repeating things or getting exposed to information multiple times. Others repeat particular steps or processes deliberately a number of times or even years to become better at certain skills. Repetition is critical to most types of learning.