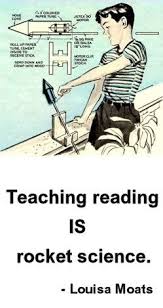 This is part 2 of the interview with Louisa Moats by David Boulton in 2003.


Dr. Louisa Moats:  We are never going to get anywhere if our approach is teachers ought to be able to do this simple thing called teaching reading. I think the rocket science of all this has to do with the requirement of a good teacher to understand what is involved in kids learning the alphabetic code and that requires meta-linguistic awareness that speech sounds are different from letters and that speech sound processing is a requirement and underpinning for learning the code. I find that that’s kind of counter intuitive. People don’t get that. They don’t think about it; they don’t know what we’re talking about.

One of the most common findings in my studies of teacher knowledge and teacher proficiencies is that even experienced teachers of reading really do not know speech sounds. If I ask them a simple thing like how many speech sounds are in the word ‘no’ and I spell it k-n-o-w, they’ll tell me there’s four speech sounds in the word because they don’t know how to separate their own knowledge of orthography from a specific awareness of speech sounds. Because we’re wired up to process phonology at an automatic level and extract the meaning from speech, there’s no requirement for the average person to be meta-linguistically aware at the phonological level.

My comment: The above was said 30 years ago. Similarly Dr.Richard Selznick in his discourse with me in 2010 and again in 2017 had confirmed that a vast majority of the few thousand kids he had tested over the years added extraneous sounds to consonants. He said that these are the kids he recommends to a training that directly teaches the sounds represented by letters.

It is now 20 years since the above interview of Louisa Moats. Are we saying that having interviewed 160 experts like Louisa Moats we are still unable to get teachers to teach the correct pronunciation of phonemes?

Let us remember the response from David Boulton to my question to him where he responded that he and his team do not want to give a solution as they do not want to be thought of as having an agenda.

Dr. Louisa Moats:  Yes. It’s artifactual knowledge that has to be acquired and reflected upon in order for a teacher to be able to teach intentionally and to read the behavior of the kids to make decisions about whether they are getting it or not, to forge that pathway even if you put a very good program in their hands.

David Boulton:  Good, that’s helpful. Let’s back up to a high level summary of this. Again, we’re saying that most teachers don’t understand the code and how the brain learns to process this code into this simulated or articulated speech stream, and that in the absence of understanding that, and you could argue to some degree in some shame avoidance about that, there’s this clinging to an almost religious like explanation to this.

My comment: After so much of study and interview of 160 experts and students who were unable to read I cannot accept that most teachers are still unable to understand the code…There is a lot more to it than meets the eye.
Posted by Luqman Michel at 4:24 AM