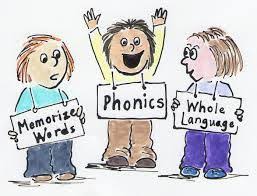 This is a continuation of my previous post. Here is an extract from the Report by the three ladies, Kathleen Rastle, Anne Castle, Kate Nation and my comments.

…the judicious selection of a small number of sight words for children to study in detail has its place in the classroom alongside phonics. As we have discussed, teaching phonics is crucial because it gives children the skills to translate orthography into phonology and thereby to access knowledge about meaning. However, when this is difficult because of spelling-to-sound complexities, there would seem to be a case for teaching children the pronunciations of a small number of such words directly, particularly those that they are likely to see very frequently in the texts they are reading (such as the, come, have, and said). In effect, this ensures that children can relate the visual symbols of writing to spoken language for as many words as possible and as early in their schooling as possible. Solity and Vousden (2009) demonstrated that the combination of knowledge of the 64 most common letter-sound mappings of English, together with familiarity with its 100 or so most frequent words, allows children to read aloud 90% of words in texts they typically encounter—putting them very efficiently on the path to independent reading.


My comment: Getting kids to learn Dolch Words is what I have been saying in my blog posts since 2010. I teach students who come to me in primary 1 to primary 4 without being able to read in English. I teach them simple phonics and the 220 Dolch Words which they memorise with ease and are able to read within 4 months of one on one tuition 3 times a week.

What these three ladies, who wrote the report above, do not know and mislead their readers, is that no one learns these ‘sight words’ by visual memory. This is probably why Sue Lloyd, Pam Kastner and others have insisted that there is no place for visual memory in teaching kids to read. We will deal with this in more detail in my next post.

The last student who came to me was when he started primary 4. After meeting the kid and his father I assured the father that I will be able to get the kid to read within 4 months. Slightly short of 3 months the father was satisfied with the progress of his son. I taught the father how to guide his son to continue learning to read.

Since the kid was in primary 4 I decided not to waste time and gave him 10 Dolch Words to memorise each time he came for his lessons. He learned them with ease just like all my previous students.

Here is a PSYCHOLOGICAL ASSESSMENT REPORT of my student above posted in my blog with the kid’s and father’s permission.

Here is a video I took of my last student who read the 57 DolchWords he had learned in 6 lessons on the day he came for his 7th lesson.

Here is a video of the same kid reading random sentences picked out of the lessons I had taught him over the previous 7 lessons.

Posted by Luqman Michel at 4:31 AM