Plasticity of the brain Dr.Jack Shonkoff 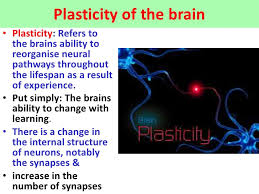 The following is an excerpt of an interview with Dr. Jack Shonkoff, Chair, National Scientific Council on the Developing Child by Dr. David Boulton almost 20 years ago.


But this is an ongoing process, and the brain is very plastic. People talk about this term “neuroplasticity.” And the one thing we know about plasticity, which is the capacity to adjust and adapt, is its greatest when the brain is immature, and it is less as the brain becomes more mature. It’s never completely gone. There is plasticity in the brains of adults.

My comment: This is what I have observed in my students. It was easier to teach those in primary one and two. It took me longer to get children in primary 3 and 4 to unlearn what they had learned wrongly in school.

Thorndike had already spoken about the importance of initial input in 1913. For many children, if what is taught does not reconcile with what was learned earlier they do not accept the new information.

Just think about how habits that are developed are easy to break early, and they’re harder to break later. We have a certain way of doing things, we have a certain way of thinking about things. The younger you are, the easier it is to change; the older you are, the harder it is to change. But mature adults can change their behaviors. Mature adults learn new things that they didn’t know before.

This is probably why Tom Cruise was able to read after he was 22 years old. He was functionally illiterate prior to that time.


There’s no question that there are children with serious learning problems that have to do with the fact that their brain works very differently from the usual brain. There are also children who have problems learning because their brain is working like most brains work, but they’re in environments that are putting unusual stresses on their ability to learn. And in most cases it’s some combination of both.

My comment: This confirms what I have been saying all along. About 20% of kids around the world need to be taught explicitly. When things are not logical to them they disengage from learning to read. This is what I gather from Sue Lloyd’s post as well.

I mean, I think a lot of the breakthroughs in understanding learning disabilities and learning problems are ahead of us. And the one thing that we shouldn’t lose sight of is that there is also the phenomenon of learning differences, which is different from a learning disability. And one of the other characteristics of the brain, the human brain and human abilities is the tremendous variation within a normal population. And obviously we’re all very concerned about not wanting to label difference as deficiency.

All of us have things we’re better at, things we’re not as good at, and relative differences in our competencies, all in a normal range, except for those who have extreme impairments.
So the messages that come out of that basic principle of brain development is that getting things right the first time is better than trying to fix them later, trying to adapt to something that was not developed in the best way at the time that it was supposed to be developed.

My comment: I realized that almost all the kids who came to me were exceptionally smart kids. Is there a concerted effort by some people with a vested interest to ensure that these kids leave school as illiterate for whatever reason?

So the sobering message here is that if children don’t have the right experiences during these sensitive periods for the development of a variety of skills, including many cognitive and language capacities, that’s a burden that those kids are going to carry; the sensitive period is over, and it’s going to be harder for them. Their architecture is not as well developed in their brain as it would have been if they had had the right experiences during the sensitive period. That’s the sobering message.

But there’s also a hopeful message there, which is unlike a critical period where it’s too late. The sensitive period says: It’s not too late to kind of try to remediate that later. And you can develop good, healthy, normal competencies in many areas, even if your earlier wiring was somewhat faulty. But it’s harder. It costs more in energy costs to the brain. The brain has to work at adapting to earlier circuits that were not laid down the way they should have been. And from a society’s point of view, it costs more in terms of more expensive programming, more specialized help.

So I think the best way to think about this is to say that prevention is better than treatment, of earlier is better than later, but it’s never too late in most cases to get kids back on track. And all of this, basically, is because there is this capacity of the nervous system to adapt, for the brain to be plastic, that is greatest when the brain is immature and young, and less as the brain gets older.

My comment: That is precisely what I have been saying since 2010. Prevention is better than cure. Prevent kids from disengaging to learn to read. Teach kids the correct pronunciation of phonemes and change the course of the lives of many.
Posted by Luqman Michel at 4:24 AM